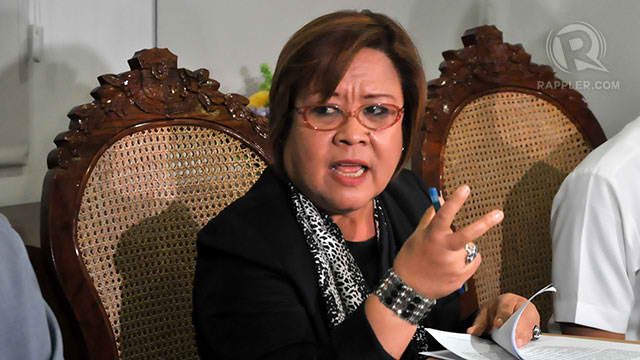 MANILA, Philippines – There is nothing wrong with the right of reply bill.

Justice Secretary Leila de Lima reiterated this position as she backed anew a pending bill in the House of Representatives requiring media outfits to publish or air with same space and airtime the rebuttal of people mentioned in reports.

“This Department does not interpose any objection to the said bills and reiterates its position in its 05 November 2012 letter to Sen. Gregorio Honasan (LML-L-05K12-1086) supporting Senate Bill No. 76 (An Act Granting the Right of Reply and Providing Penalties for Violation Thereof) save for the comment that title of the said Senate bill is misleading,” she said in a two-page legal opinion.

In previous congresses, lawmakers had to move to insert a right of reply provision in the Freedom of Information (FOI) bill, which is also pending before the House committee on public information.

In the 16th Congress, the consolidated version of the FOI bill does not contain any right of reply provision. Instead, authors filed it as a separate bill.

At least 3 right of reply bills are pending before the committee, including:

Some lawmakers earlier renewed calls for the passage of the right of reply bill following the proliferation of news reports tagging their names in the accounting records of Benhur Luy, the principal whistleblower in the pork barrel scam.

FOI advocates, however, said they believe right of reply should be a separate bill.

Media groups oppose the passage of the bill altogether.

In an earlier statement, the National Union of Journalists in the Philippines said the right of repy bill will be “tantamount to prior restraint” and curtails editorial prerogative on what should or should not be published. – Rappler.com