SK registration: The youth came, but not in droves 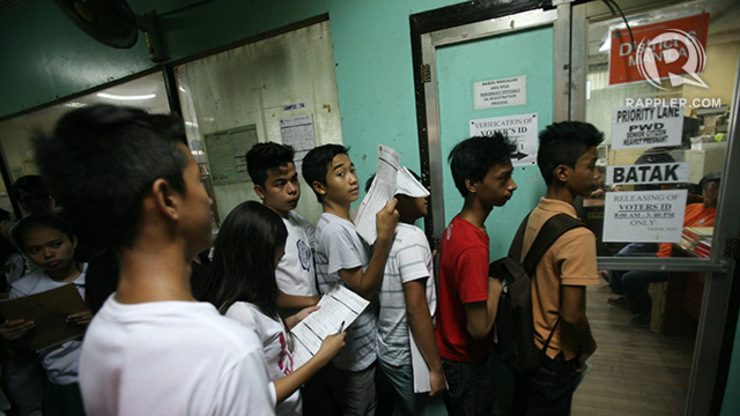 Facebook Twitter Copy URL
Copied
There will be no extension of the registration period, says Comelec, except in the 4 areas where it has been reset due to recovery efforts from Tropical Storm Mario

MANILA, Philippines – The turnout of Filipinos age 15-17 in local offices of the Commission on Elections (Comelec) was mixed on Monday, September 29, the last day of registration for the 2015 Sangguniang Kabataan (SK or youth council) elections.

In Quezon City, many students rushed to Comelec district offices to beat the 5 pm deadline. 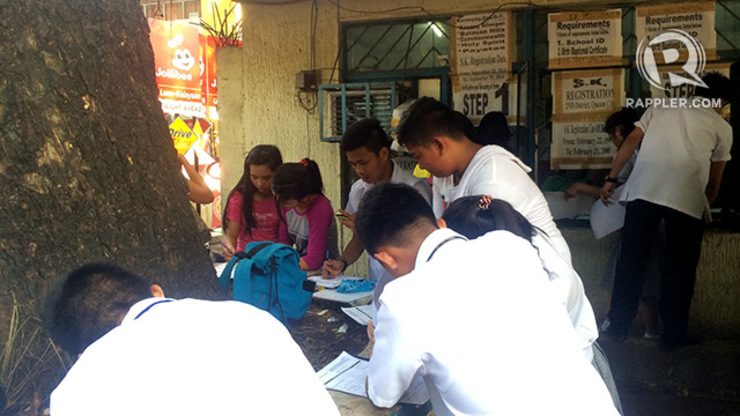 Quisay and her classmates found out only recently that Monday was the last day of registration, and headed to the Comelec office to register.

“Para po mas maging maayos ‘yung mga kabataan sa district namin (So that the youth in our district would become better people),” she said, hoping that the SK could help solve youth-related issues like bullying.

In Mandaluyong City, there were only a few SK applicants on Monday. But the city’s election officer, Julia Villar, said that majority of the youth in the city had registered last Friday and over the weekend.

Voter’s registration for the February 21, 2015, SK polls started on September 20.

Comelec spokesperson James Jimenez said that this year’s SK voters’ registration was largely a success, despite the mixed turnout on Monday.

“We were never expecting that the turnout would be big, because many have already registered last July 2013. But, by and large, it’s good. Marami, pero hindi dagsa (Many went to register, but not in droves),” Jimenez said.

Comelec expects 3 to 3.5 million Filipino youth to participate in the 2015 SK polls. Around 1 million of them would be new voters from this month’s registration drive, joining around 2 million eligible voters who signed up in July 2013, said Jimenez.

There will be no extension of the registration period, added Jimenez, except in 4 areas where it was reset due to Tropical Storm Mario (Fung-Wong).

The SK elections were originally scheduled for October 28, 2013, but President Benigno Aquino III signed a law postponing it to a later date, to give way to reforms in the youth representation system.

Since then, there was no holdover for outgoing SK officials nor appointments for temporary SK officials.

Comelec Chairman Sixto Brillantes Jr, however, is pushing for another postponement, this time to October 2016. He said the poll body is busy in its preparations for the May 2016 national elections. – Rappler.com