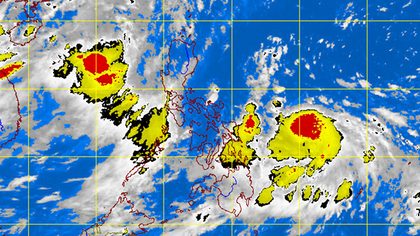 Butchoy was last spotted 480 kilometers east southeast of Guiuan, Eastern Samar, packing maximum sustained winds of 110 km per hour and gusts of 140 kph, the state weather bureau PAGASA said. However, the weather disturbance is still not expected to directly affect any part of the country within 24 hours.

Areas under signal number 1 can expect to experience winds of up to 45-60 kph.

Butchoy, still considered by PAGASA a tropical storm despite being declared a typhoon by the US military’s Joint Typhoon Warning Center, is moving towards the west northwest at a speed of 11 kph.

PAGASA considers a tropical cyclone a typhoon if it carries maximum winds of over 118 kph.

Within the 450 km diameter of the storm, rainfall is estimated to be 15-25 millimeters per hour, considered heavy. 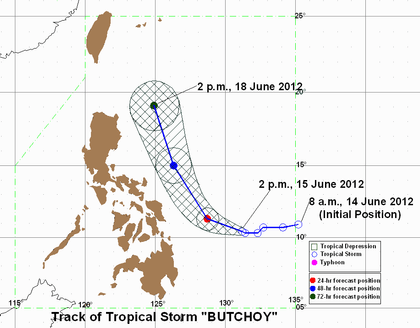 The state weather bureau earlier forecast the storm to miss land, but raised the possibility of it crossing the Visayas.

The storm is expected to enhance the southwest monsoon, which is currently bringing rain over western sections of Luzon, by Saturday, the bureau said.

The rest of the country will have cloudy skies with scattered rainshowers and thunderstorms.

Fishing boats and other small seacraft are advised to avoid going out to sea in Luzon, Visayas, and eastern Mindanao due to rough seas, labeled as risky by PAGASA.

Meanwhile, the Department of Transportation and Communications (DOTC) directed the Philippine Coast Guard (PCG) and Marina to ensure the safety of passengers and take extra precautionary measures.

In a statement, the DOTC directed the PCG to remind all shipping companies, agencies and ships’ crew to strictly comply with the directive not to allow all vessels to sail when typhoon signals 1, 2 or 3 are raised in the port of origin, along the route up to the final port of destination.

On the other hand, the LGUs which have jurisdiction over motor bancas less than 3 gross tons, are expected to warn the seafarers whether to sail or not.

The PCG, the statement said, is now on red alert to immediately rescue passengers of any boat that may be placed in distress. – Rappler.com