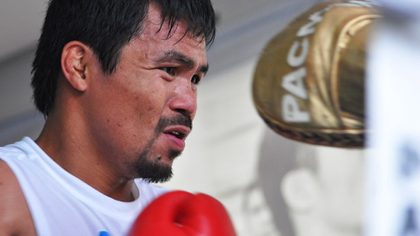 MANILA, Philippines – Boxing champ Manny Pacquiao is expected back home this Saturday, June 16, to check on his constituents in Sarangani, which was recently hit by devastating flash floods.

Pacquiao, who left Los Angeles on Thursday night, is accompanied by his financial adviser Michael Koncz and other members of his team. His wife, Jinkee, and their children, however, were left in the States.

Pacquiao will stay for a few days to visit Sarangani, which was affected by flash floods due to heavy, localized rains that have inundated parts of Mindanao. The number of affected families in the province as of Friday, June 15, has reached 1,335.

The congressman has pledged financial support that can help victims and boost search and rescue operations.

The People’s Champ is back to his congressional duties days after his Saturday (Sunday in Manila) match with Timothy “Desert Storm” Bradley, in which Pacquiao lost his WBO welterweight title. The controversial split decision, which favored Bradley, became a hot issue around the world.

In an interview before their flight, Koncz said that they have no definite plans for Pacquiao’s next fight. “After a vacation, we will sit down and decide what we are going to do next in boxing,” he said.

Pacquiao is slated to face the boxing ring again in November. But instead of a rematch with Bradley, it was reported that he prefers to fight Juan Manuel Marquez for the fourth time, possibly even in Mexico.

As for the controversial decision in the Pacquiao-Bradley fight, the World Boxing Organization has said it would review the fight. This came after boxing promoter Bob Arum requested the Nevada State Athletic Commission to investigate circumstances surrounding the judges’ decisions.

After his short trip to the Philippines, Pacquiao will be joining his family on a trip to Jerusalem. – Rappler.com