Oct 7, 2014 11:44 AM PHT
Facebook Twitter Copy URL
Copied
Historians say there could never have been the euphoric scenes of freshly liberated East Germans dancing atop the Berlin Wall on November 9, 1989 without the demonstrations in Leipzig the previous month

BERLIN, Germany – The east German city of Leipzig celebrates Thursday, October 9, its pivotal role in toppling the Berlin Wall 25 years ago, when it harnessed the combustive force of mass candlelight vigils and firebrand pastors.

Historians say there could never have been the euphoric scenes of freshly liberated East Germans dancing atop the Berlin Wall on November 9, 1989 without the demonstrations in Leipzig the previous month. 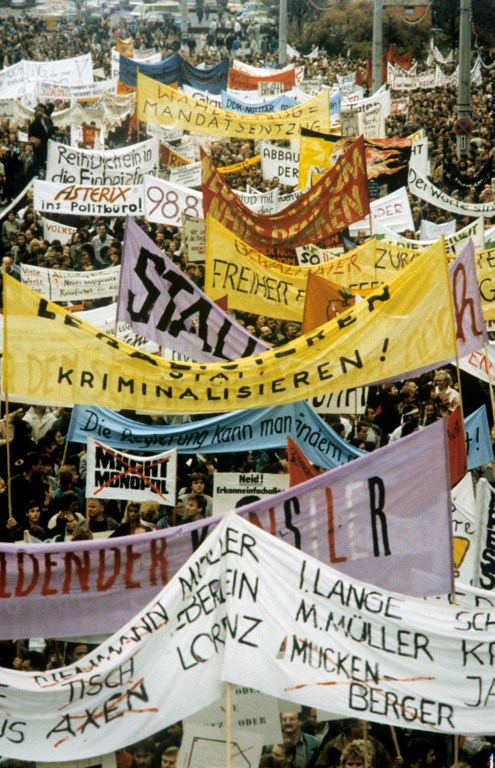 On the morning of October 9, the communist authorities thought they were fully prepared to deal with mounting unrest they had seen every Monday for several weeks.

The army was mobilized with water cannons and tanks, the hospitals had stocked blood and cancelled all staff leave, and Western journalists were kept at bay in East Berlin.

The Stasi secret police expected 30,000 protesters and the orders of East Germany’s hardline leader Erich Honecker were clear: they were to be crushed as brutally as the crowd of 10,000 had been the previous Monday.

But after the weekly prayer for peace at Saint Nicholas Church, up to 70,000 people massed nearby, burning candles in hand, chanting “Keine Gewalt” and “Wir sind das Volk” (“No violence” and “We are the people”).

Stunned and helpless in the face of the brazen moral challenge, the authorities did not crack down on the rally and the Soviet army stayed in its barracks.

A month later to the day, the Berlin Wall would fall.

“They were ready for everything. Except candles and prayers,” recalled Christian Fuehrer, Saint Nicholas’s iconic pastor who died in June.

For this year’s 25th anniversary celebrations marking the fall of the Wall, German President Joachim Gauck, who was himself a dissident pastor in East Germany, has chosen to focus on the Leipzig commemorations rather than the November 9 ceremonies in the reunified capital.

“The Monday demonstration on October 9, 1989 was decisive,” he said in a statement.

“It encouraged people in countless places in the GDR to stand up against the communist dictatorship and for freedom and human dignity. Only that made the fall of the Berlin Wall and then German unity possible,” he added, using the acronym for communist East Germany.

‘Hope in their hearts’

“That night in Leipzig, we saw an astounding number of citizens of the GDR willing to take risks, publicly,” said Eppelmann, who now runs a state foundation researching East Germany’s dictatorship.

“‘I don’t know if I will return home unharmed, if I will be imprisoned or beaten, if I’ll still have my spot at the university tomorrow, if I’ll have problems at work’. The majority of those who hit the streets that night thought of those things and went anyway,” he said.

“They wanted to liberate themselves.”

Fuehrer recounted in his memoirs: “Despite the fear, they had hope in their hearts thanks to prayer.”

The risks to the protesters were very real after Honecker warmly congratulated the Chinese leadership on crushing the “counter-revolutionaries” in Tiananmen Square in June that year.

But by October 18, Honecker would resign.

And the evening of November 9, the spokesman of the East German government, Guenter Schabowski, would announce that citizens had full travel rights, with immediate effect.

“The drama played out in 30 days,” Eppelmann said.

“October 9… was the beginning of the end.”

However few of those in the streets dreamed it would be the demise of the communist state.

“We were thinking of a reformed GDR,” Eppelmann said.

The events in Leipzig “showed for the first time that change was possible,” as had already been seen in Poland, Czechoslovakia and the “glasnost” sweeping the Soviet Union of Mikhail Gorbachev.

Gauck will be joined in Leipzig by his counterparts from Poland, the Czech Republic, Slovakia and Hungary in tribute to their people’s roles in ripping down the Iron Curtain.

The heads of state already met for key anniversaries from the momentous timeline of 1989 in Warsaw and Budapest and will gather again in November in Bratislava and Prague. – Rappler.com