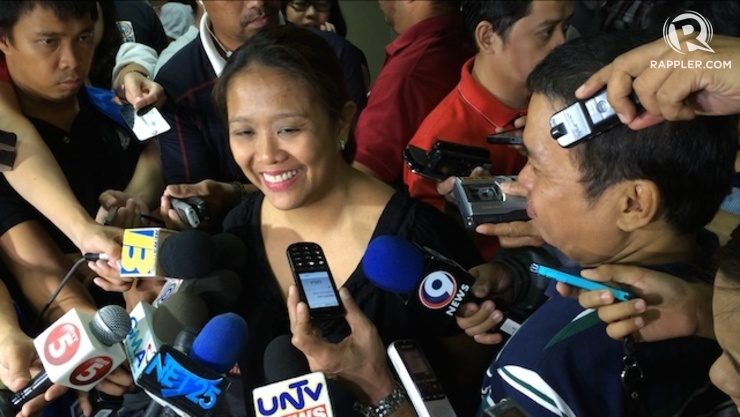 Facebook Twitter Copy URL
Copied
'He is still the most trusted government official and I am very thankful,' says Senator Nancy Binay of her father

“We’re expecting the worst, a Yolanda type of demolition,” the senator told reporters on Tuesday, October 7, when asked to comment about her father’s latest 15-percentage-point drop in the trust and performance ratings.

The Binay family, 3 of whom served as mayor of Makati City, is facing a string of corruption allegations in relation to alleged overpriced infrastructure projects. The Senate Blue Ribbon subcommittee on top of the probe is led by the former partymate of the Vice President in PDP-Laban, Senator Aquilino “Koko” Pimentel III.

Senator Binay acknowledged that the Senate probe affected her father’s numbers in recent polls. But she chose to look at the brighter side in highlighting that her father remains the most trusted public official.

Vice President Binay enjoys the approval of 66% of Filipinos and the trust of 64% of Filipinos, based on the newly released Pulse Asia survey conducted from June to September 2014. While the numbers reflect a drop of 15 percentage points, Binay’s numbers remain higher than the numbers of President Benigno Aquino III. Aquino registered 55% approval ratings and 54% trust ratings.

Watch her reaction below:

She also noted that that Pulse Asia’s survey was conducted before her father’s speech at the PICC, where he tried to refute allegations made in the Senate probe.

“The survey period did not capture his response. Let’s wait for the next survey,” she said.

The Senate probe on the alleged overpriced Makati City Hall 2 parking building will continue on Wednesday, October 7. It is expected to be the last hearing on the issue before the subcommittee proceeds to the other allegations against the Binays. – Rappler.com