Authority over Lake Lanao: Bangsamoro bill has to be clear

Oct 8, 2014 9:43 PM PHT
Facebook Twitter Copy URL
Copied
Mindanao officials raise concerns about who will have jurisdiction over this major source of electricity in Mindanao, when Lanao del Sur is proposed as a core territory of the Bangsamoro government 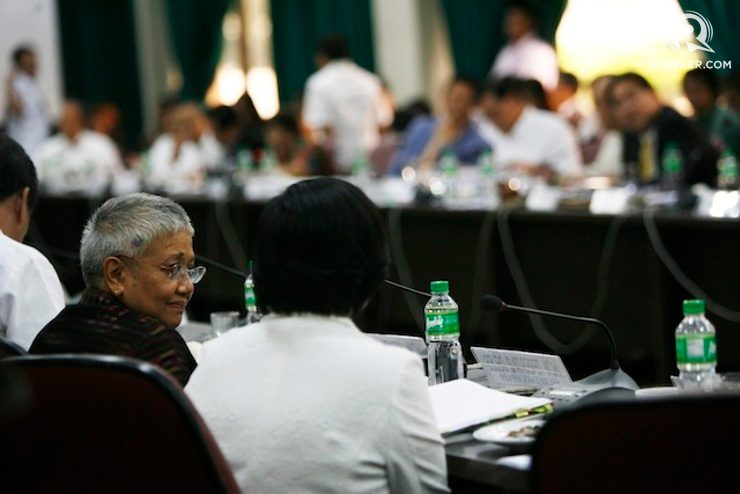 MANILA, Philippines – When the proposed Bangsamoro government is created, who will have jurisdiction over Lake Lanao, a major source of electricity in Mindanao?

A congressman and a Mindanao agency official raised this concern during the 3rd committee hearing on the proposed Bangsamoro Basic Law (BBL) in the House of Representatives on Wednesday, October 8.

While Lake Lanao is located in Lanao del Sur – one of the proposed Bangsamoro core territories – it also supplies electricity to other areas in Mindanao through the Agus and Pulangi Power Plant Complex, which supplies more than 50% of Mindanao’s electric needs.

Mindanao Development Authority (MinDA) chief Luwalhati Antonino said there should be a clear protocol on whether it should be the Bangsamoro government or the central government who should make decisions over the water resource.

“I don’t want Mindanao to have a war for water,” Antonino said. “There is already a history in Mindanao of fighting over water.”

Under the bill, Ferrer said, environmental protection of water resources within Bangsamoro areas will be under the jurisdiction of local government units and the autonomous government.

When it comes to power generated from Lake Lanao, the central government and the Bangsamoro government will have shared powers.

Section 3, Article V, of the proposed law, states that “the Bangsamoro Government shall have the exclusive authority to regulate power generation, transmission, and distribution operating exclusively in the Bangsamoro and not connected to the national transmission grid.”

It also allows power plants and distribution networks in the Bangsamoro  to interconnect and sell power over the national transmission grid to electric consumers.

However, when power generation, transmission, and distribution facilities are connected to the national grid, the bill states, “the Central Government and the Bangsamoro Government shall cooperate and coordinate through the intergovernmental relations mechanism.”

The same is true in the case of utilities shared between regions. The bill states there shall be “cooperation and coordination among the relevant government agencies.”

For Zamboanga Representative Celso Lobregat, the provisions are vague. The lawmaker said the law should already specify how the “intergovernmental relations mechanism” over Lake Lanao should function.

Create a Lake Lanao Resource Board

To address such concerns, economist Felipe Medalla, a member of the Bangko Sentral ng Pilipinas Monetary Board, said the bill should be expanded to create a Lake Lanao Resource Board.

This will ensure that any possible conflicts would be resolved in a harmonious way, Medalla said.

The water issue, which Medalla described as the “holy grail” of economies, should be addressed in the law clearly, Medalla said.

“Give the water rights to Bangsamoro and if [private entities] want it, you pay for it. You want power, just like you will pay for diesel. The sooner you address it now, the better before conflct arises,” Medalla said.

“The best way is to make the rights very clear: who belongs to what and who pays for whom. My understanding of historical rights is it belongs to the people there. If businesses want it, they need to pay for it,” he added.

There could be other ways of addressing the issue. Medalla suggested exploring the option of increasing the annual block grant or automatic appropriations for the Bangsamoro in exchange for relinquishing some powers over water to the national government.

“Maybe Bangsamoro will give up shared jurisdiction over water [in Lake Lanao] if you raise sharing in block grants from 4% to 6%,” Medalla said.

Under the bill, the Bangsamoro government is set to receive automatic appropriations of 4% in the share of the national government in the internal revenue allotment. This is expected to amount to P35 billion ($782.82 million) in its first year of operation, Budget Secretary Florencio Butch Abad said in an earlier hearing. The ARMM budget is currently at P20.4 billion ($456.27 million).

The intergovernmental relations mechanism is one of the unique features of how the “assymmetric” relationship between the Bangsamoro government, which is designed to be more autonomous than the ARMM, and the central government is expected to operate.

This assymetric relationship makes it distinct from other regions, which are directly under the central government. Unlike others local government units, the Bangsamoro will be parliamentary in form.

The idea is to give the Bangsamoro greater powers than the ARMM to enable it to have full autonomy and address decades-old grievances of neglect that has fueled armed conflicts.

Section 4, Article VI, creates an Intergovernmental Relations Body, which will include an appointed representative from the  central government and a minister from the Bangsamoro government.

The body is tasked to “coordinate and harmonize the relationship” between the two entities.

How this mechanism of coordination between national bodies and local bodies would operate in various aspects, including power generation, legislation, and auditing has been the subject of most discussions in Congress so far.

For instance, the basic law creates Bangsamoro Commission on Audit (COA) that is independent from the national COA. Former national treasurer Leonor Briones earlier said this could create conflict in case of discrepancy between the findings of the two bodies.

BBL defenders have said it will be the national COA which shall prevail in case of differences, but lawmakers have pointed out that this is not explicitly written in the law.

The Bangko Sentral ng Pilipinas (BSP) has also asked lawmakers to clarify the powers of the the Bangsamoro government in acquiring loans, which usually needs to go through BSP for approval.

The same issue on relations between the regional and central govenrment was again raised by MinDA and the Southern Philippine Development Authority (SPDA).

MinDA is a government agency in charge of coordinating efforts towards economic development in the entire Mindanao. Antonino said the BBL must clarify the role that MinDA will play when the Bangsamoro, which is designed to be more fiscally and politically autonomous, is created.

Meanwhile, Datu Reza Sinsuat said that while the SPDA supports provisions on the law allowing the Bangsamoro to create government operated and owned corporations in its territory, it is concerned about the bill’s “silence” on the entities’ relation to the Bangsamoro government vis a vis the government commission for GOCCs.

The SPDA is one of the GOCCs that President Benigno Aquino III recently approved to be abolished.

During the first BBL briefing at the Senate, Senator Ferdinand “Bongbong” Marcos Jr, chairman of the Senate committee on local government, also questioned how a proposed body that will serve as a forum between the Bangsamoro Parliament and the Philippine Congress would function.

Marcos had earlier said the issue on how power will be shared between the central government and the Bangsamoro government is the “single biggest subject” that needs to be deliberated on about the proposed law.

Despite concerns about gray areas in the proposed law, Mindanao Business Council president Vicente Lao on Wednesday issued an appeal to lawmakers.

“I know it’s scary that the BBL is now on the table but we should take a risk,” Lao said. “The basic concept of the law is still good. For business to thrive, we will need a very business friendly environment. A bad peace is still better than a good war.”

The decades-old armed conflict has claimed the lives of over 120,000 people, according to military estimates. – Rappler.com