Oct 10, 2014 1:02 PM PHT
Rappler.com
Facebook Twitter Copy URL
Copied
Justice Secretary Leila de Lima gives her assurance that any investigation on the Binays would be in pursuit of the truth, and not political considerations 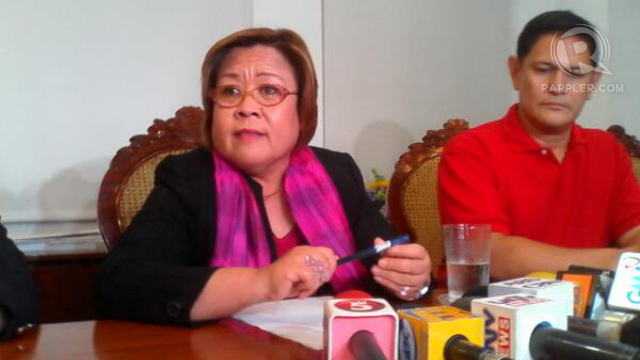 MANILA, Philippines – Justice Secretary Leila de Lima said on Friday, October 10, that she would decide on whether or not to pursue an investigation on corruption allegations against Vice President Jejomar Binay and members of his family after she meets with the whistleblowers next week.

De Lima also said she is mindful of the potential implications of such an investigation – apparently referring to the political plans of Binay, who heads the opposition – but assured that the Department of Justice will not be influenced by “any political considerations.”

“I intend to sit down with the whistleblowers early next week….[We want to] secure more information from them to help us in our decision whether or not itutuloy na namin ang pag-iimbestiga ng NBI (the NBI will conduct the investigation),” she said in a media interview on Friday, October 10.

De Lima said during the meeting, the whistleblowers in the Senate probe on the alleged overpriced Makati building would be reminded of their obligations and commitments under the Witness Protection Program (WPP).

“We will warn them, if they violate our rules they run the risk of having the coverage terminated,” she said.

Questions have been raised on how former Makati vice mayor Ernesto Mercado, who is under the WPP, managed to get on a helicopter to secure aerial shots of the so-called “Hacienda Binay” in Rosario, Batangas, without the DOJ’s knowledge. (READ: Mrs Binay’s royal taste? ‘Kew Gardens,’ aircon piggery)

De Lima said that the DOJ’s access to the whistleblowers, who are under the WPP, can allow them to secure “more information” on their allegations not yet revealed at the Senate inquiry.

“It would be such a waste if we would not pursue valuable, significant information that can help [our investigation]. It’s hard to ignore the pronouncements of the whistleblowers. Because more often than not, their statements are credible,” she said in a mix of English and Filipino.

The DOJ chief also said that based on the Senate panel’s request, she has directed the NBI to form a “dedicated team” to track down personalities who had been summoned to attend the Senate probe but have failed to appear so far.

Among them is Gerry Limlingan, tagged by former allies of the Vice President as one of his “dummies” in acquiring businesses. (READ: Ex-ally: VP Binay used ‘dummies’ to acquire land, businesses)

No politics in probe

Responding to questions, De Lima said that the DOJ is “being careful” in handling the issue, since the Binay camp has repeatedly alleged that the exposé is politically motivated to pull down the Vice President’s presidential bid in 2016.

De Lima gave her assurance that any investigation would be in pursuit of the truth, and not political considerations.

“The public deserves to know the truth….We will not be swayed by political considerations,” De Lima said.

Meanwhile, the Vice President denied the allegation of Mercado that he still owns  property in Tagaytay, as this was sold in December 2012. His lawyer, Martin Subido, said prior to the sale, the property was listed in the Vice President’s Statement of Assets, Liabilities and Networth (SALN).

Subido said this is “proof” of Mercado’s ploy to “fool the public” with allegations of corruption against the Binays, and cited Mercado’s claim that the Vice President owns a 350-hectare property in Batangas.

The Vice President had said that he only leased a property in Rosario for JCB Farms, and that property is now owned by Sunchamp Real Estate Development Corporation.

In an interview on radio station DXCM in North Cotabato, where he had an official engagement, the Vice President said Mercado had given senators conducting the probe a “bum steer” regarding the Batangas property.

“Makukuryente mga ‘yun. Galit na galit ho ang may-ari dahil sa pagbibintang na ‘yun. ‘Yung halaga ng kanilang korporasyon naapektuhan (They were given a bum steer. The owner is very angry because of those allegations. The value of their company is being affected),” he said.

The concerned company is publicly listed.

The Vice President has been invited to attend the next Senate hearing so he can explain his side – and would even be given the privilege to cross-examine his accusers – but said he would not participate in an inquiry “in aid of demolition.”

When asked, the Vice President said their lawyers are still determining whether to elevate to the Supreme Court the jurisdictional challenge made by Mayor Binay to the Senate Blue Ribbon subcommittee, which the latter had junked.

The Binay lawyers had earlier said they are mulling over seeking an SC injunction or temporary restraining order on the Senate inquiry. – Rappler.com