BIR ‘constrained’ in using bank info to go after Revilla 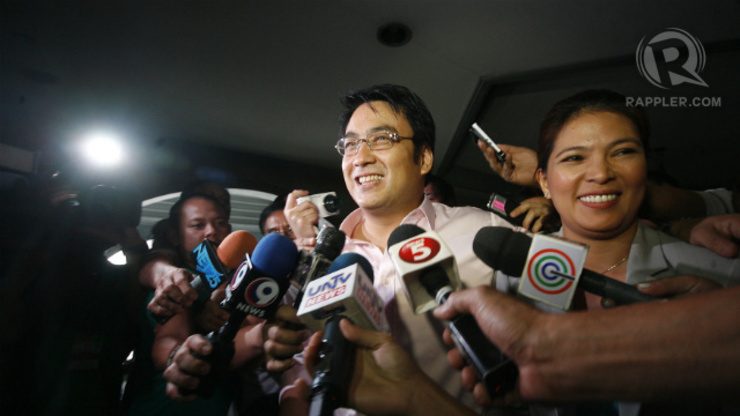 This is according to BIR Commissioner Kim Henares, who added that her bureau had faced enormous difficulty in the past when accessing bank inquiry results by the Anti-Money Laundering Council (AMLC).

“We are constrained, because tax evasion is not a predicate crime of money laundering [in the Philippines]… It’s like pulling teeth,” Henares told Rappler, adding that this is not the case in countries in sync with international anti-money laundering standards.

Henares, however, clarified that it does not preclude the BIR from going after Revilla’s tax liability using information it culls via its own investigation.

She said the BIR bases its assessment of tax liability on third-party information, tax documents like income tax returns, records of properties, and data other than bank information.

An AMLC revelation on indications of money laundering over multi-million deposits in his and his family members’ bank accounts looms over Revilla, who is already charged of plunder and graft for the misuse of his Priority Development Assistance Fund (PDAF).

The AMLC report prompted speculation on what other charges the embattled senator should be made liable of.

Henares noted that where there is cash inflow from unexplained sources, there is always a “tax aspect” that has to be probed. She said this may involve unpaid income tax or, at the very least, documentary stamp taxes.

But Henares said Congress had barred joint investigations by and coordinations between the BIR and the AMLC.

Approved amendments into the country’s anti-money laundering law include the AMLC’s “non-intervention in BIR operations.” The amendments were signed into law in 2013.

“Nothing contained in this Act nor in related antecedent laws or existing agreements shall be construed to allow the AMLC to participate in any manner in the operations of the BIR,” the law now reads.

The PDAF, a lump sum now declared unconstitutional by the Supreme Court, is a discretionary fund meant for lawmakers’ pet projects. The scheme to massively siphon off PDAF was allegedly masterminded by businesswoman Janet Lim-Napoles, whose long-time financial officer Benhur Luy revealed the scam to authorities.

In the AMLC report, P87 million ($1.94 million*) in deposits in Revilla’s and his family members’ accounts were found to be consistent with data indicated in the financial records of Luy from 2006 to 2010. (READ: P87M in Revilla deposits, Luy’s ledger match – AMLC)

This boosts the theory of the prosecution that not only was Revilla’s PDAF misused but that he deliberately allowed and financially gained from its misuse. (READ: Will Cambe take the fall for his senator-boss Bong Revilla?)

Plunder involves the illegal amassing of wealth by a public official through raiding of the public treasury. Plunder and graft, unlike tax evasion, are listed as predicate crimes of money laundering.

Among the penalties of plunder include the recovery of properties unlawfully acquired by the accused public official, while a guilty verdict for graft cases may prompt the “confiscation or forfeiture” of any “unexplained wealth manifestly out of proportion to his salary and other lawful income.”

In addition to the P87 million cash deposits from 2006 to 2007 consistent with Luy’s ledger, cash and investments in varying amounts were found to be undeclared in Revilla’s Statement of Assets, Liabilities, and Net Worth (SALN) from 2004 to 2010.

The AMLC found only 2 of Revilla’s bank accounts it peeked into to be from legitimate sources including his salaries received from a television network and fees from product placements.

The rest of the accounts begs explanation from Revilla. A total of 81 accounts were examined by AMLC.

Another two of Revilla’s accounts were found to store funds for the operating expenses of his Senate office. These two accounts were excluded in the AMLC’s analysis of the discrepancies in his SALNs over a 7-year period.

For 3 years from 2004 to 2006, Revilla declared that he had no cash and investments when his bank records show transactions amounting to as much as P58 million ($1.29 million*) in a single year.

The full AMLC report, a copy of which was obtained by Rappler, revealed the following discrepancies:

Being untruthful in the SALN is an offense chargeable with perjury.

Justice Undersecretary JJ Justiniano denied perjury charges are being pursued at the moment, indicating his confidence with the current PDAF scam cases.

“If we can convict him already for plunder, a capital offense, what more can we ask?,” he said. – Rappler.com