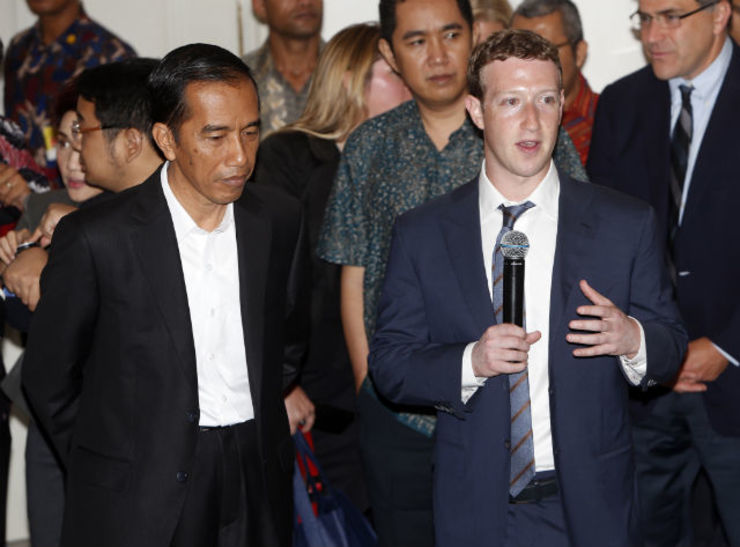 JAKARTA, Indonesia – Facebook founder and CEO Mark Zuckerberg may not be active on Twitter, but Indonesian netizens tweeting about his visit to the country made him a trending topic on Monday, October 13.

The IT billionaire quietly arrived in Indonesia – home to 69 million Facebook users – over the weekend and announced his presence by posting a shot of himself watching the sunrise at Borobudur Temple in Central Java on Sunday.

But another interesting shot of him in Borobudur made the social media rounds. First shared by the Facebook account Mark Zuckerberg: The Youngest Billionaire in the World, it showed him taking a photo of other tourists who didn’t realize who he was.

In Yogyakarta, he also visited “Kampung Cyber” (Cyber Village), a rural village where locals are making an effort to connect all residents to the Internet not only to gain access to information but also to increase the exposure of local businesses.

But Zuckerberg began trending when he met with President-elect Joko “Jokowi” Widodo on Monday morning. After a formal 45-minute meeting in the Jakarta city hall, where they discussed how to improve Internet access in Indonesia and how Facebook can help small and medium-sized enterprises (SMEs), Jokowi took Zuckerberg to a famous traditional market in Tanah Abang, Central Jakarta.

Jokowi said Zuckerberg agreed to assist the government in promoting SMEs in Indonesia through Facebook. “I am very enthusiastic to cooperate with Indonesia, as there are tens of millions of Facebook users in this country, so we can develop business and create many jobs,” Zuckerberg said, according to state-news agency Antara.

The initial purpose of Zuckerberg’s visit, however, is the developers workshop for Internet.org, a movement by Facebook and 6 other IT companies to provide Internet access to all.

Zuckerberg also met with XL Axiata, the second largest telecommunications provider in Indonesia, which announced on its social media accounts that it had been chosen by Facebook as a strategic partner in an initiative to boost mobile network speeds. The partnership is the first of its kind, explains Techcrunch.

Reports say Zuckerberg is also planning to visit the Ministry of Tourism and Creative Economy. – Rappler.com