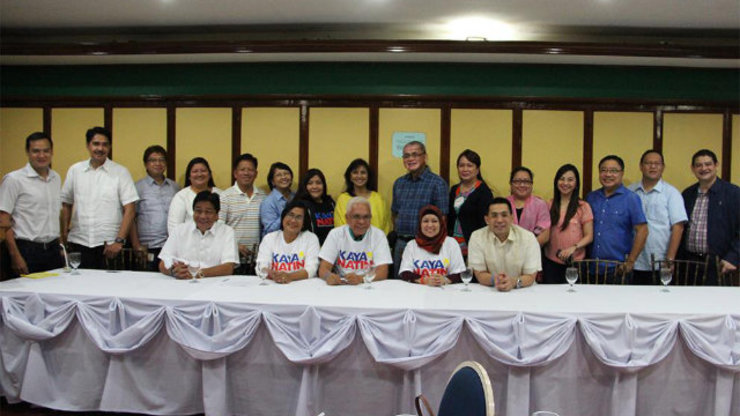 This is a press release from Kaya Natin! movement

Current KN Champion and former Saranggani Gov. Miguel Dominguez introduced Rep. Turabin-Hataman as a Champion of women’s rights who continues to espouse peace and development in Mindanao. Prior to her serving in the House of Representatives, she also served as Executive Director of the National Commission on Muslim Filipinos and up until today continues to help more Moro women become effective leaders in our government.

It was during super typhoon Yolanda that Mayor Javier rose to prominence when this businessman turned public servant immediately put into place a relief and rehabilitation plan for his municipality within 24 hours after the super typhoon struck and destroyed most of his town. Javier’s quick response helped save thousands of lives not only in his town but also in the province of Leyte. Currently, he also serves as the President of the League of Municipalities of the Philippines and continues to share with other local government units the best practices that he has learned in the field of Disaster Risk Reduction Management.

Aside from Yolanda, the year 2013 also saw our country being hit by a major earthquake that caused much destruction in the provinces of Cebu and Bohol. Mayor Evasco made headlines last year when he refused to allow a Philippine National Red Cross (PNRC) contingent to distribute relief goods in his town due to the PNRC’s refusal to cooperate with the local government. Evasco is also known as one of the leaders of organic farming in the country where he serves as the Vice-President for Visayas of the League of Organic Agriculture Municipalities (LOAM). In 2011, Evasco also led his town in winning the prestigious Gawad Galing Pook Awards for outstanding local government units.

Ask any businessman in the Philippines what they think are major roadblocks in doing business in our country and they will surely say it’s the government bureaucracy in  securing necessary licenses and permits. Fortunately, this is not the case in Llanera, Nueva Ecija which under the leadership of Mayor Vero was adjudged as one of the most outstanding local government units in the country for being able to streamline its issuance of the necessary government permits to do business in their town. It is therefore not surprising that under Vero’s watch, Llanera has continued to attract more businesses that have provided more jobs for her constituents.

When one hears about Malabon City, images of massive flooding and poverty also come to mind. This was until the youthful Mayor Oreta assumed the leadership role in 2012 of the city and implemented reforms in city hall. Now, Malabon delivers more efficient and effective services to its constituents through its Citizen’s Charter and has also curbed graft and corruption by ensuring transparency in all its financial transactions. One need only to visit the website of Malabon to easily access its financial reports including the results of its biddings and procurement. Aside from this, Oreta has made it his priority to ensure that every child in Malabon is able to go to school and finish basic education.

Senator Guingona led these five KN Champions in taking their Pledge of Good Governance where they all promised to shun all forms of illegalities and also take a more active role in the promotion of good governance in our country.

In his closing remarks, Jim Paredes challenged the new KN Champions to continue to become beacons of hope for our country and show that there are still many good men and women who serve in our government. – Rappler.com