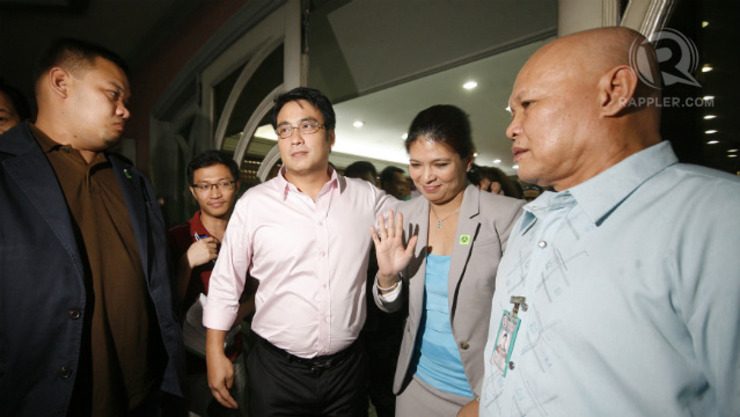 Facebook Twitter Copy URL
Copied
A justice official, however, contends that talent fees are usually paid through checks. Millions in cash deposits were made to Revilla's accounts

MANILA, Philippines – Detained senator Ramon “Bong” Revilla Jr insists that the millions in cash deposits in his bank accounts, and that of his family members’, came from legitimate sources, contrary to the findings of the government’s financial intelligence unit indicating otherwise.

“All I can say is we can justify everything; everything we have worked hard for. I was already an actor at a young age and was already rich,” he said in Filipino during a chance interview Thursday, October 16.

The senator refused to comment further, saying his defense was already covered by the sub judice rule.

He referred to himself as “one of the highest paid actors in the country, not to brag.”

Revilla reiterated his long-standing position that the accusations hurled against him was part of a political smear campaign against opposition politicials like him. (READ: Revilla to Aquino: Stop politicking, think of the country)

Now indicted for plunder and graft over the pork barrel scam, Revilla is a known film and television actor before becoming a legislator. His father also treaded the same tightrope. (READ: Revilla father, son transacted with Napoles – witness)

The AMLC also reported P87 million ($1.941 million*) in cash deposits to his and his family members’ accounts to be consistent with the records of pork scam whistleblower Benhur Luy, confirming Revilla’s receipt of kickbacks over the scam as alleged by Luy. (READ: P87M in Revilla deposits, Luy’s ledger match – AMLC)

In its report, the AMLC found only two of Revilla’s bank accounts to be from legitimate sources, including his salary from a television network and fees from product placements. (READ: BIR ‘constrained’ in using bank info to go after Revilla)

Another two of Revilla’s accounts were used for the operating expenses of his Senate office.

A total of 81 accounts were examined by the AMLC.

Deposits to the accounts of Revilla and his family were made in cash, which AMLC lawyer and prosecution witness Leigh Von Santos said was “not usual business practice.”

“Perhaps he needs to prove that. And you all know that for those earnings, they are paid in check,” Justiniano said in Filipino. “And the [AMLC] witness also said that those that come from legitimate sources such as from his actor’s fees and endorsement fees are already excluded [in the AMLC report].”

The testimony of Santos is considered to boost the credibility of Luy and the prosecution’s theory that Revilla’s Priority Development Assistance Fund (PDAF) was not only misused; he also financially gained from, and was part of, the conspiracy geared towards its misuse. – Rappler.com