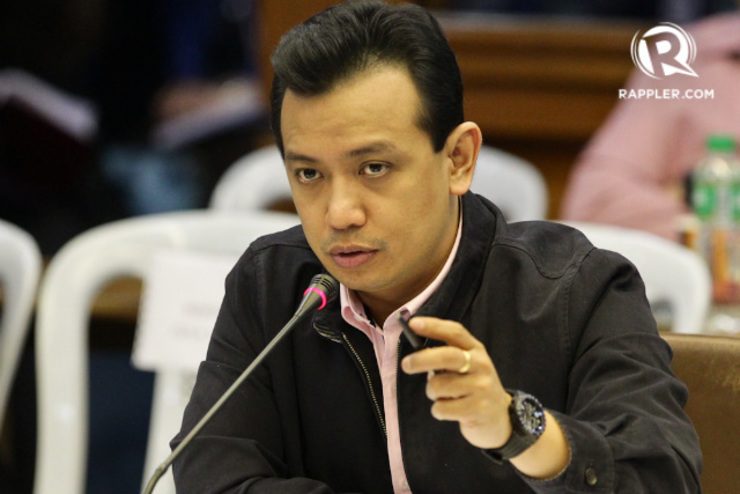 MANILA, Philippines – Press releases are one thing but being interrogated by a former soldier is another.

Tiu of Sunchamp Real Estate Development Corporation is the registered owner of a vast property in Batangas, that Binay’s critics allege the Vice President owns.

Former Makati Vice Mayor Ernesto Mercado, one of the primary “whistle-blowers” in the probe into the Binays’ wealth, said Tiu is merely the property’s owner on paper.

Trillanes insisted his information was reliable and that he had the documents to prove that the businessman is just Binay’s dummy. Tiu has expressed his willingness to appear before the Senate.

The Vice President was supposed to hold a press conference this week to address new allegations against him but decided to put this on hold until after Tiu testifies before the subcommittee.

He also said he felt “betrayed” by Tiu, who he once considered a friend. “I was one of the speakers during the launching; I spoke together with Sec. Kiko Pangilinan,” said Trillanes, referring to a video of him speaking during a Sunchamp event making the rounds online.

“I felt betrayed kasi (because) I know him, he was a friend. Pero dahil dito sa cover-up na ito (but because of this coverup) our friendship will not protect him, so tutuluyan natin ito (we’ll push through with this),” added Trillanes.

(Binay is coddling Limlingan, because if we’re able to get Limlingan to speak, everything about their syndicate will be revealed.)

In previous hearings, former Mercado accused the Vice President of earning 13% from city projects during his time as mayor. Limlingan was allegedly one of the 3 persons who received the cash in behalf of Binay.

Limlingan was also allegedly one of Binay’s dummies. The Senate has tried to summon Limlingan several times, but to no avail.

Trillanes and Cayetano, both members of the Nacionalista Party, have led the probe into allegations of Binay’s corrupt ways.

The Vice President and his son, incumbent Makati Mayor Jejomar Erwin Binay Jr, both face plunder complaints before the Ombudsman for the construction of the allegedly overpriced Makati City Hall Building 2.

The Senate probe, which was sparked by the plunder case, is close to hitting its 2-month mark. Trillanes in the same press conference said it would take at least 8 more hearings before they can wrap up. The senator said he also wants to investigate 5 other Makati buildings.

In the course of several hearings, former allies and Makati city officials have come forward to accuse the Binays of profiting from Makati.

The Binays have dismissed the probe as merely political in nature, allegedly a scheme to hurt the vice president’s chances in the 2016 presidential elections.

All ally of the Vice President from his United Nationalist Alliance (UNA) said the ruling Liberal Party (LP) was against the “demolition job,” under “Operation Plan Stop Nognog 2016.”

Binay’s good standing in surveys have dropped since the probe began. However, he remains the most trusted public official and the leader in early presidential polls. – Rappler.com