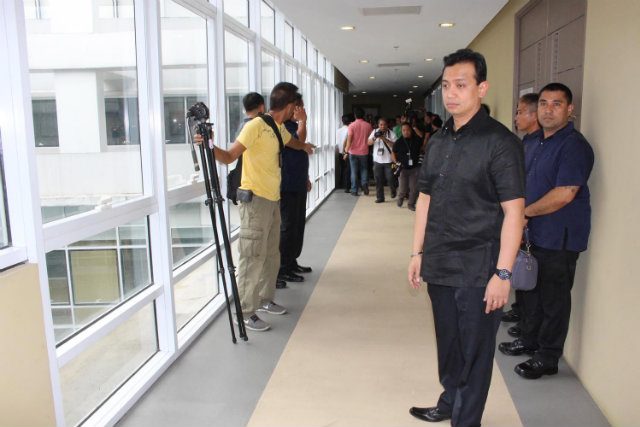 Facebook Twitter Copy URL
Copied
Among the infrastructure projects that the senator wants to investigate are the Makati Science High School building, Makati Nursing building, Makati City Hall I, and the Friendship Suites

MANILA, Philippines – Senator Antonio Trillanes IV said he is preparing a new corruption exposé against Vice President Jejomar Binay, although he’s not sure when he would be able to present.

The revelation is not related to the issue being tackled by the Senate blue ribbon subcommittee, the alleged overpricing of the Makati City Hall Building II, Trillanes said in a press conference on Thursday, October 16.

“We have new exposé, new documents, and hopefully new witnesses,” the senator said in Filipino. “This is new. It’s a new kind of corruption committed by Vice President Binay and more evidence to strengthen testimonies earlier presented.”

Trillanes did not elaborate on the corruption exposé but he said he wants at least 8 more hearings on Binay. He wants to scrutinize 5 more infrastructure projects in Makati City. (READ: COA: Red flags, undue haste in Makati building)

“Just to give you an idea, limang buildings pa ‘yung iimbestigahan natin (we’re going to investigate 5 more buildings). If it’s one hearing per building, that’s already 5 hearings. We will have to do ocular inspection,” Trillanes said.

The senator identified 4 of the 5 Makati infrastructure projects to be investigated:

The Senate blue ribbon sub-committee led by Senator Aquilino Pimentel III has held 8 hearings on the allegedly overpriced Makati City Hall II Parking Building. The probe has branched out to other alleged acts of corruption by the Binay family, including the 350-hectare farm in Batangas that Binaly allegedly owns through dummies.

In Thursday’s press conference, Trillanes vowed to prove that businessman Antonio Tiu is a dummy of Binay.

The secretary-general of Binay’s political party United Nationalist Alliance (UNA), JV Bautista, earlier sought to turn the tables on Trillanes. He said the senator had not sufficiently explained the supposed old issue of 8 “luxury cars” which he did not declare in his assets list in 2003. (READ: Trillanes on UNA exposé: 8 luxury cars ‘old issue’)

A newspaper also reported that Trillanes was supposedly a passenger in one of the flights that surveyed the Batangas farm that they claim belongs to Binay.

Trillanes denied it. “It is not true. The date they mentioned, October 6, is the birthday of my child. We were together that day.”

Trillanes questioned the Binay camp for making an issue out of the aerial survey if the Vice President is claiming it is not his property. – Carmela Fonbuena/Rappler.com