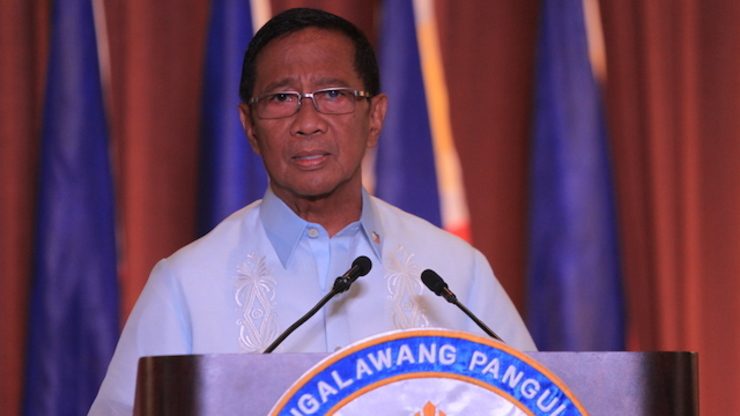 A big majority of Filipinos – 79% – agreed that Vice President Jejomar Binay should face the Senate Blue Ribbon Subcommittee to explain his side on the string of corruption exposés made against him, according to a Social Weather Stations (SWS) survey published by Business World newspaper.

Only 10% disagreed and 11 % were undecided about Binay’s appearance in the Senate.

The survey polled 1,200 respondents from September 26-29, or a month since the Senate probe was launched in August and about a week after Binay delivered a 21-minute televised speech to defend himself against corruption allegations.

Geographical and socio-economic class breakdown also shows strong support across the board for his appearance before the Senate probe.

“The proportion of those who strongly agree was highest in Metro Manila at 64%, followed by ‘Balance Luzon’ at 58%, Mindanao at 54% and the Visayas at 51%,” the Business World said quoting the SWS report.

Senator Aquilino Pimentel III, the chairman of the subcommitte, is set to send another invitation to the Vice President. The 9th Senate hearing is scheduled next week, October 30.

Pimentel said they will allow the Vice President to respond to all the allegations raised against him before the Senate and in the media. “Kahit anong gusto niyang sagutin,” Pimentel told Rappler in a phone interview on Sunday, October 19.

The survey was also conducted around the time the Vice President’s son Makati Mayor Jejomar Erwin “Junjun” Binay Jr sought to stop the probe by questioning the subcommittee’s jurisdiction. The Senate would later junk his motion.

The survey also covers accusations by lawyer Renato Bondal, who filed the plunder raps against the Binays, about the allegedly overpriced cakes for Makati’s senior citizens at around P1,000 a piece. The Binay camp denied this, saying the cakes only cost P306.75 each. Bonday was later forced to admit that he just guessed.

The survey was conducted before the Commission on Audit confirmed “red flags” in the Makati City Hall II Parking Building and the exposé on a 350-hectare farm in Batangas that the Binays allegedly own through dummies. – Rappler.com