Facebook Twitter Copy URL
Copied
'I won't give them that opportunity to disrespect the Office of the Vice President.'

MANILA, Philippines – Despite invitations from the Senate blue ribbon subcommittee and a survey that shows a big majority wanting the him to face the investigation into his alleged dealings and wealth, Vice President Jejomar Binay won’t be attending the hearing on Wednesday, October 22.

“I won’t give them that opportunity na binabastos ang opisina ko (to disrespect the Office of the Vice President),” said Binay on ANC’s Beyond Politics, alluding to senators Antonio Trillanes IV and Alan Peter Cayetano, who have been grilling resource persons in the probe.

On Wednesday, the Vice President will instead be speaking at the opening of the 40th Philippine Business Conference and Expo at the Manila Hotel around the same time the probe is scheduled to begin.

The Senate scheduled to hold its 10th hearing on an allegedly overpriced Makati city building, which was constructed when the Vice President was still mayor. The project was completed when his son Erwin Binay Jr had succeeded him as local chief executive.

Although the building was supposedly the focus of the probe, the hearings had since covered many other allegations made by Binay’s critics. These included the commissions that Binay supposedly got from favored contractors and suppliers of the Makati city government, as well as an allegedly undeclared property in Batangas province. Senator Trillanes had said he wants 5 more Makati buildings investigated, and that doing so would take at least 8 more hearings.

On Tuesday evening, Binay said he was willing to face Trillanes in a debate “anytime, anywhere” but with one condition: it should be done outside the Senate, so the senator cannot hide under the cloak of parliamentary immunity.

No dummies, no hacienda

In the last subcommittee hearing, former Makati Vice Mayor Ernesto Mercado claimed that one of the biggest – and most flamboyant – proofs of the Binay family’s alleged ill-gotten wealth was a 350-hectare property in Batangas, allegedly owned by Binay through a dummy.

The alleged dummy – businessman Antonio Tiu – has dismissed this claims, despite Trillanes’ insistence that he and Senator Alan Peter Cayetano would be able to prove his being Binay’s dummy.

Tiu said in a TV Patrol report that he could sue the senators for the allegations made against him. Tiu said he was willing to face the Senate.

Binay denied owning the land, and said his wife only rents a part of the estate – a leased portion of the land for her flower shop business.

Lawyer Martin Subido, the Vice President’s legal counsel, admitted Binay used to operate a piggery in a small portion of the compound – about 9 hectares of leased land – but has since sold the business in 2010 to Agrifortuna Incorporated owned by a certain Laureano Gregorio.

Binay said he is not privy to whatever deal Gregorio and Tiu struck when the latter bought the land.

Even before this “exposé,” Mercado told the Senate that it was Binay’s habit to own land and business through his friends. One of those friends, Gerry Limlingan, has been subpoenaed by the senate but is nowhere to be found.

In a press conference, Trillanes said Binay was coddling his “best friend” Limlingan.

Limlingan was also allegedly one of pointpersons for Binay’s 13% kickbacks from city projects. Binay said Tuesday that he doesn’t know if his friend would attend the probe but said Limlingan was discussing it with his own lawyers.

Binay, his family, and his allies’ stand on the probe has been clear from the start – it’s nothing but a ploy to derail his chances of bagging the presidency in the 2016 polls. 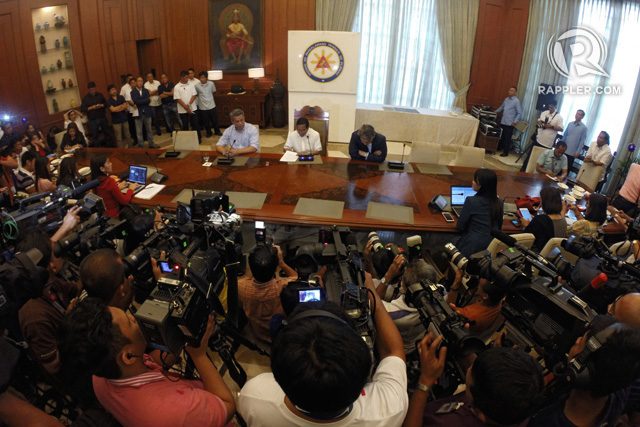 It’s all part of what they claim is “Operation Plan Stop Nognog 2016.” “Nognog” is a derisive term for people with dark skin.

Binay himself accused Roxas of being behind the exposés against him. Roxas is the presumptive candidate of the ruling Liberal Party. (READ: Mar Roxas on 2016 election: I can defeat Binay – again)

The Vice President believes all the accusations against him are ultimately the result of people who “want to be in power and see [him] as a threat to that ambition.”

Since the probe began, Binay has seen his numbers – both in trust rating surveys and in preferences for 2016 – slip. He, however, remains the top choice for president in 2016 and is still the country’s most trusted public official.

“I ask our people to examine closely the direction the so-called investigation is taking. So far, they have resorted to humiliating me and my family with such viciousness I have not seen employed by the Senate before,” Binay said in a Tuesday, October 21 statement. – Rappler.com