Despite transfer, US retains custody of Marine

Oct 22, 2014 12:39 PM PHT
Rappler.com
Facebook Twitter Copy URL
Copied
The US embassy insists it has the 'right to retain custody' of Private First Class Joseph Scott Pemberton despite his transfer to Camp Aguinaldo. The Philippines concurs. 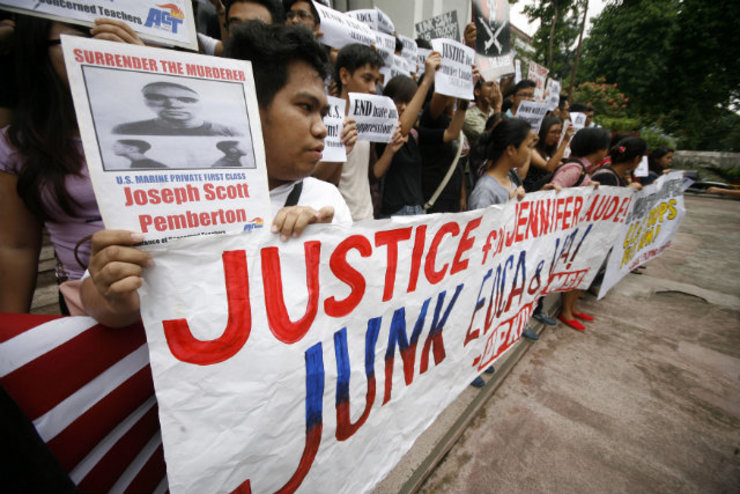 Foreign Secretary Albert del Rosario told a Senate hearing on Wednesday that the “legal custody [of Pemberton] remains with the US but he is secured in the Philippines.”

The US embassy in Manila said the same in a statement. “In accordance with the U.S.-Philippine Visiting Forces Agreement (VFA), the United States has a right to retain custody of a suspect from the commission of the alleged offense until completion of all judicial proceedings,” said the statement sent hours after Pemberton arrived at Camp Aguinaldo, general headquarters of the Philippine military, from Olongapo City, where he was held by the US aboard USS Peleliu.

Del Rosario said Pemberton’s transfer to Camp Aguinaldo was a result of the Philippines’ request to the US seeking to get custody over the US soldier.

He added that the Philippines “has not hesitated” to inform the US government that it is exercising its primary jurisdiction over the case.

“We are not conceding this right,” Del Rosario said.

Armed Forces chief of staff General Gregorio Pio Catapang Jr earlier said Pemberton was under the “joint” custody of both governments. “The court will decide on the appropriate detention facility once a case has been filed against the accused,” added Catapang.

In an unexpected turn of events, Pemberton was brought to Camp Aguinaldo early Wednesday, a day after the city prosecutor in Olongapo began a preliminary probe into accusations he killed Filipino transgender woman Jennifer Laude on October 11.

“At around 845 am today the Armed Forces of the Philippines (AFP) received Private First Class Joseph Scott Pemberton from the US authorities. Accompanied by US and Philippine officials, he was airlifted by an aircraft from his temporary detention facility onboard USS Peleliu that is docked in Subic,” Catapang announced early Wednesday.

Pemberton arrived via a chopper at the Joint US Military Assistance Group (Jusmag) compound inside Camp Aguinaldo. The 20-footer van where he is detained is a facility of the Mutual Defense Board-Security Engagement Board. The facility has been there since 2000. He will be sleeping in a military type cotbed.

Note to the US

During a hearing of the Senate committee on foreign relations on Wednesday, Senator Miriam Defensor-Santiago asked Del Rosario about his department’s actions to take the US soldier under Philippine custody.

Santiago asked Del Rosario about the diplomatic note transmitted by the DFA to the US embassy regarding the Philippine government’s request to get custody over Pemberton.

Del Rosario said the note specified that Philippine custody over Pemberton should take effect following the issuance of an arrest warrant.

The Olongapo City Prosecutor’s Office is conducting a preliminary investigation to determine if there’s enough evidence to charge Pemberton in court.

Eduardo Oban Jr, executive director of the Presidential Commission on the VFA, said Pemberton will remain in Camp Aguinaldo until the end of the preliminary investigations.

Should the case go to court, Del Rosario asserted that the Philippines will continue to seek custody over Pemberton.

“We are aware that prior to conviction, the US has the right to retain custody over its servicemen under Article 5, Section 6 of the VFA. But such right can be waived, and we affirm that if a warrant of arrest is issued, we will request the US to turn over the serviceman’s custody to us,” he said.

The foreign affairs secretary added that the US is “fully aware” that it would be “totally unacceptable” for them to detain Pemberton within the premises of the US embassy, as was done in the 2005 case involving another US soldier.

Critics of the VFA say the agreement is lopsided in favor of the US because of the custody issue when it comes to American servicemen charged with crimes. (READ: Why PH must assert sole custody of US Marine)

This was first tested in the case of US Marine Corporal Lance Daniel Smith, who was charged with raping a Filipina in 2006. Throughout his trial and after his conviction, Smith was held at the US embassy grounds in Manila. A higher court later acquitted Smith after his Filipina accuser “Nicole” recanted her statement against him.

Pemberton’s transfer to Camp Aguinaldo marked the first time that an American serviceman is being held in a Philippine military camp. – with reports from Katerina Francisco/Rappler.com