‘VFA is a failure’ – Miriam 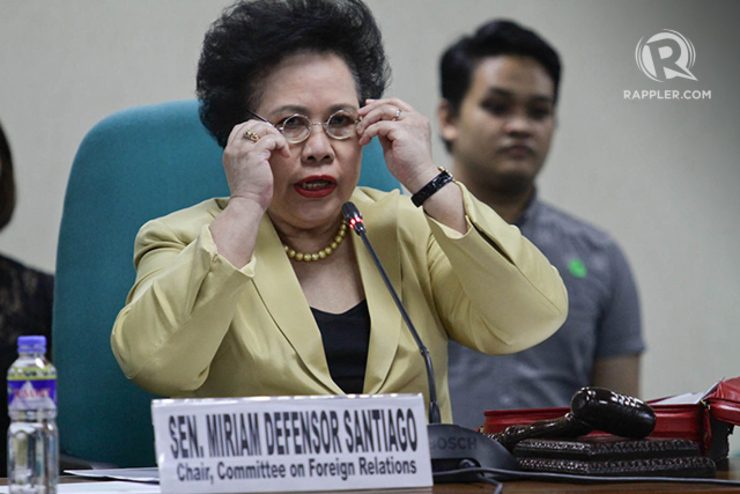 Facebook Twitter Copy URL
Copied
Senator Miriam Santiago renews her call to scrap the Visiting Forces Agreement between the Philippines and the US, citing the 'gross disparity' in the provisions of jurisdiction and custody over erring soldiers

MANILA, Philippines – Calling the Visiting Forces Agreement (VFA) a “historic document of inequity between a colonizer and its former colony,” Senator Miriam Santiago renewed her call to scrap the agreement because of the “gross disparity” in the provisions of jurisdiction and custody.

Santiago hit the provision in the agreement that grants the Philippines jurisdiction over US servicemen accused of crimes, but gives the US custody over them.

On Wednesday, October 22, Santiago presided over the hearing of the Senate foreign relations committee on the killing of Filipino transgender woman Jennifer Laude.

The primary suspect in the case is 19-year-old US Marine Joseph Scott Pemberton.

Santiago said the unequal provisions of the VFA heavily favor the United States.

The senator in particular hit the provisions on jurisdiction and custody of US servicemen who commit crimes in Philippine territory.

But Santiago said this “gross inequality” in the provisions, among other things, “has given our country much grief.”

“This gross inequity is the elephant in the room,” Santiago said.

Early Wednesday, Pemberton was transferred by chopper from the USS Peleliu in Zambales to Camp Aguinaldo in Quezon City. Philippine foreign affairs secretary Albert del Rosario said “legal custody [of Pemberton] remains with the US but he is secured in the Philippines.”

Del Rosario said the Philippines will continue to seek custody over Pemberton if he is charged with murder in court.

‘We are of no value to America’

The VFA, signed in 1998 between the two governments, allows the rotation of US troops in the Philipines, including the entry and movement of US assets.

In her opening statement during the Senate hearing, Santiago called the agreement “a failure.”

She said it has not helped the Philippine military modernize sufficiently to keep up with its Asian neighbors.

It doesn’t assure the Philippines either of US support in the event of an attack, Santiago added.

The senator said the VFA does not imply that US will come to our aid in case of a firefight with China over maritime disputes in the South China Sea.

Santiago said the United States has consistently maintained that it adopts a neutral stance on the issue.

She added that US President Barack Obama’s “pivot to Asia” has been threatened by crises in other parts of the world, including the threat of the Islamic State of Iraq and Syria.

“Sa ngayon, wala tayong halaga sa Amerika,” she said. (As of now, we are of no value to America.)

In her call to scrap the agreement, Santiago said the Philippines should do away with a document that ties it to an “unreliable ally.”

“We are a stillborn state because our umbilical cord from the US has never been cut,” the senator added. – Rappler.com