5,500 US troops in Manila not allowed to leave ship 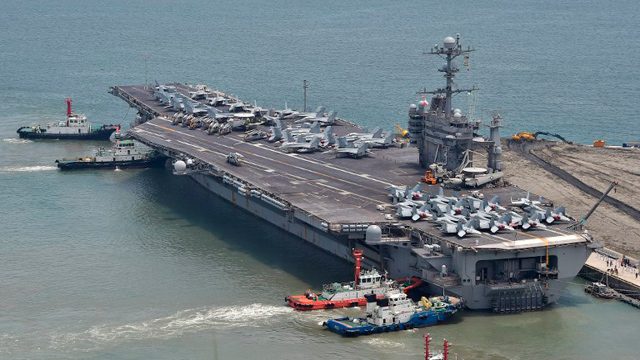 Facebook Twitter Copy URL
Copied
'We decided, out of respect really for the sentiment of the Philippines, not to have liberty for the crew on this visit,' says US Ambassador Philip Goldberg

MANILA, Philippines – Some 5,500 American troops aboard one of the US military’s floating air base, the USS George Washington, arrived in Manila on Tuesday, October 23, but were not allowed to get off the ship.

“It was a short visit. They did few exercises here with the Philippine Navy. We decided, out of respect really, for the sentiment of the Philippines not to have liberty for the crew on this visit,” US Ambassador Philip Goldberg told reporters in a roundtable interview on Friday, October 24.

Goldberg added: “It’s a shame.Twenty to 30,000 service people come here for exercises and other events during the course of a year. They want to see the Philippines. They want to meet Filipinos. They want to engage and taste Filipino food and buy things. It would have been better for some of the shopping malls. We didn’t think that it’s good moment for shore liberty just out of respect for sentiment here.”

The nuclear-powered US aircraft carrier has a crew of about 5,500 sailors – 320 of whom are Filipino-American. It can carry up to 80 aircraft. It docked off the coast of Manila after conducting naval exercises with Philippine and Japanese ships in the West Philippine Sea (South China Sea). It left Manila Friday morning, October 24.

The murder of transgender Filipino woman Jennifer Laude allegedly by US Marine Private First Class Joseph Scott Pemberton has gripped the Philippines, oldest treaty ally of the US in the Pacific. Pemberton was among American soldiers who participated in joint exercises with Filipinos in Olongapo a few weeks ago.

The incident again puts the spotlight on the Visiting Forces Agreement (VFA) that allowed the return of the American troops after a 1991 Senate vote evicting US bases in the country.

Critics argue that continued custody of Pemberton by the US shows that VFA is lopsided in favor of the Americans.

Goldberg maintained that the defense relationship of the Philippines and the US continues to be strong. (READ: Not a good time to review VFA, says US envoy)

“It doesn’t diminish the fact that the George Washington and the carrier group was here. The strategic relationship betwen our two countries continues and our commitment to Philippine security continues. That is really the important issue,” said Goldberg. – Rappler.com