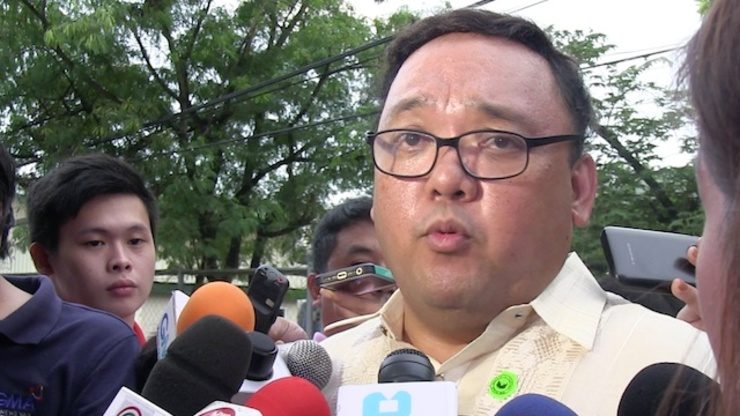 Facebook Twitter Copy URL
Copied
Harry Roque says: 'They're deflecting the issue. The issue is the murder of Jennifer and the accountability of the US serviceman.'

“It is now being investigated,” Catapang told reporters on Monday. It is up to the JAGO to determine if the military police committed some lapses and if complaints would be filed against the protesters.

(General Catapang ordered this morning an investigation into the incident where Attorney Roque prodded them to take those actions. We could see in the videos how the intruders entered the security fence.)

Roque denied Cabunoc’s allegations, saying what happened last week was “spontaneous” on the part of Marilou Laude and Sueselbeck.

“They’re deflecting the issue. I will not allow it. The issue is the murder of Jennifer and the accountability of the US serviceman,” Roque told Rappler in an SMS message.

The Laude family has filed a murder complaint against US Marine Joseph Scott Pemberton for the death of Jennifer Laude in Olongapo City on October 11. The case has resurfaced debates on the continued joint exercises between Philippine and American troops here, and highlighted prejudices against transgender people.

The victim’s family and Sueselbeck barged into Camp Aguinaldo on October 22, hours after Pemberton was moved to a detention facility inside the military headquarters. (READ: Pemberton in PH camp ‘confidence building’ move)

There are 3 gates leading to the 20-foot container van where Pemberton is detained. The family pushed the first gate while Marilou Laude and Sueselbeck climbed the 2nd gate. The German shoved the military police who was trying to prevent him from further advancing.

The media followed the Laudes in front of the 2nd gate but pulled out after camp commander Brigadier General Arthur Ang asked them to. Ang would later talk to the Laude family, Sueselbeck and Roque.

After the incident, the Armed Forces filed a complaint against Sueselbeck before the Bureau of Immigration (BI) and the German embassy.

On Sunday, October 26, Sueselbeck issued a public apology for his behavior. “I extend my sincere apology for the incident that happened at Camp Aguinaldo on 22 October 2014. I regret that my action appeared as if I was disrespecting Philippine authorities, especially the Armed Forces of the Philippines. That was not my intention,” he said in a statement. “I understand I was perceived by Philippine military officials as having pushed a soldier in a violent manner. It certainly was not an assault. I could not immediately stop my forward movement but video footage from any of the media covering that event can prove that I never aggressively attacked any soldier. I merely wanted to reach Marilou, make sure she was safe, and join her in asking questions.”

The military action against Sueselbeck drew mixed reactions online, and Cabunoc found himself in a word war on Twitter on Sunday.

Cabunoc argued that the rule of law should prevail in making Sueselbeck accountable for his actions inside the camp. He highlighted the supposed “deception” taken by the Laude family when they entered the camp through Gate 6 and hid Sueselbeck at the back of a vehicle when they were prevented from entering another gate, Gate 3. He said foreign nationals need clearance before they could enter the camp.

Both Pemberton and Sueselbeck have been declared “undesirable aliens” by the BI. – Rappler.com