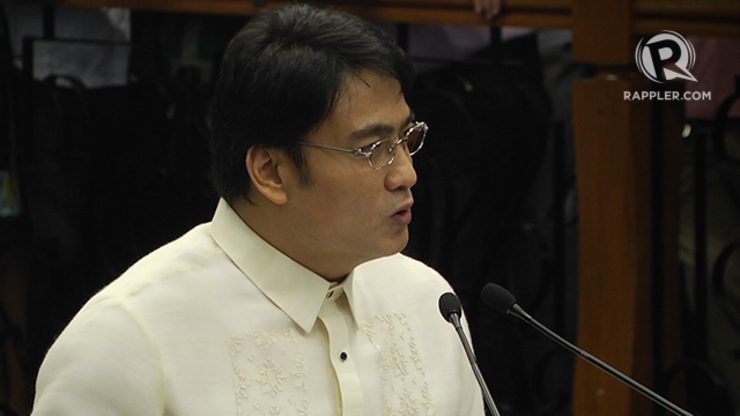 Facebook Twitter Copy URL
Copied
(UPDATED) The assets, amounting to P224 million, will be temporarily under court custody if the writ sought is issued. This is to make sure the government wouldn’t be left holding the bag, once the court rules against Senator Ramon ‘Bong’ Revilla Jr in his pork barrel scam cases

MANILA, Philippines (UPDATED) – Determined to secure what the public was allegedly defrauded of, the government sought for the temporary seizure of detained Senator Ramon “Bong” Revilla Jr’s assets amounting to P224 million ($5 million)*.

Prosecutors with the Office of the Ombudsman filed on Monday, October 27, an ex-parte motion for the issuance of a writ of preliminary attachment or garnishment before the anti-graft court Sandiganbayan.

The subject writs are issued by a court ahead of its decision on a case to secure payment from Revilla if it eventually rules in favor of the victim, in this case the government.

Attached to the pleading is an affidavit of merit executed by Ombudsman field investigators Gerhard Basco and Jose Romano Francisco listing the assets of Revilla the state sought seized.

The list includes 44 bank accounts and investments excluding those already closed by Revilla when news on the PDAF scam broke out, 28 real properties, 15 motor vehicles, 5 separate shares of stock totaling P1.14 million ($25,331) in 3 different corporations, and shares in 12 other exclusive sports clubs and private companies.

The assets will be under judicial custody until such a time the court rules on Revilla’s case.

The October 27 motion only covers the alleged ill-gotten wealth covered by his plunder case.

Also on Monday, Senate President Franklin Drilon announced that the chamber would implement the 90-day suspension of Revilla and his staff, lawyer Richard Cambe, as ordered by the Sandiganbayan last July 31. The suspension will be in effect from November 3 to January 31, 2015.

Revilla is facing plunder and 16 graft cases over allegedly pocketing P224 million from his Priority Development Assistance Fund, and misusing a total of P517 million ($11.5 million) in PDAF, respectively. His cases are being heard by the Sandiganbayan First Division.

Among the penalties of plunder include the recovery of properties unlawfully acquired by the accused public official. Meanwhile, a guilty verdict for graft cases may prompt the “confiscation or forfeiture” of any “unexplained wealth manifestly out of proportion to his salary and other lawful income.”

Earlier, the Anti-Money Laundering Council found indications of money laundering in the accounts of Revilla and his family members.

In the 12-page motion, the State reserved its right to recover the civil liability arising from Revilla’s alleged offenses.

The motion was also filed without prejudice to the separate filing of a forfeiture case.

No senator was named respondent in the said civil cases.

While the aides of other senators charged over the PDAF scam also face a forfeiture case at the Manila RTC, no such action was filed against Revilla’s aide and co-accused Richard Cambe before the same court.

The biggest scandal in recent history, its revelation generated public clamor for greater transparency in the use of government funds. –Rappler.com