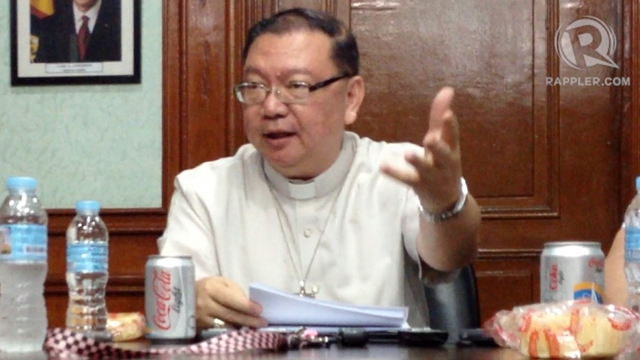 MANILA, Philippines – He says he has nothing to hide and is willing to step down if allegations of financial mismanagement against him are proven true.

But Parañaque Bishop Jesse Mercado still won’t open for scrutiny the financial records of his diocese.

Breaking his silence Wednesday, June 20, on a Rappler investigation that he misused donations for calamity victims, Mercado issued a blanket denial that the money was misappropriated.

He said the story, published June 18, was peddled by disgruntled priests in his diocese who belonged to “a small group, about 5 or 6 who have some difficulties.”

We have reported that priests and lay leaders had asked the Apostolic Nuncio to the Philippines, Archbishop Giuseppi Pinto, to investigate Mercado.

The 61-year-old bishop admitted he recently met with the Papal Nuncio but said they did not talk about the controversy.

In a prepared statement he read before reporters at the Catholic Bishops’ Conference of the Philippines office in Manila, Mercado stressed that “all donations are properly receipted and promptly turned over to their intended beneficiaries.”

In “some urgent cases,” such as typhoon Ondoy and tropical storm Sendong, “the diocese even advanced the amounts” to the beneficiaries. “A detailed report is being prepared. All expenses are studied, reviewed and properly document in the spirit of stewardship, transparency and accountability.”

Some priests and lay leaders in Parañaque have accused Mercado of using donations for calamity victims for purposes other than the original intention of the donors.

They said Mercado has been violating Canon Law 1300, which states that “the intentions of the faithful, who give or leave goods to pious causes… once lawfully accepted, are to be most carefully observed, even in the manner of the administration  and the expending of the goods.”

The priests said they have been asking Mercado to present the financial records of the diocese, after some parishioners asked about what happened to their donations.

Our sources were able to get receipts and vouchers for donations, which indicate that some of the funds were not remitted to the beneficiaries.

Several priests had already met with the Papal Nuncio to complain about the alleged lack of financial transparency in the Parañaque diocese and the double-standard policy that Mercado reportedly imposes on his priests.

This reporter asked Mercado to provide documents or receipts that could prove how his diocese used the calamity funds donated to it. He shot back: “What for? Why are you asking for that?”

Asked if he was willing to resign if the allegations are proven true, Mercado said: “Any time. I am always at the service of the Church.”

Mercado tagged a few disgruntled priests as behind the pieces of information that reached Rappler.

On the alleged diversion of donations, the prelate explained  that “some parishes remit too late, so these funds are added to the calamity fund.”

A check, however, with the balance sheet of the financial report of the diocese showed no item for calamity fund.

Of the collections and donations his diocese has received, Mercado singled out the donations for the Muntinlupa fire victims, which he vaguely explained. We reported that total donations for the victims reached P129,201.25; none was released to the beneficiaries.

Mercado also denied he has been withholding funds from the diocese’s social programs.

“Social programs are funded according to the budget policies of the diocese in order to avoid wastage of funds. Proper liquidation is required before new tranches are released precisely in order to ensure that the funds get to the intended beneficiaries,” he said.

On members of the clergy who have left the priesthood out of frustration with his management style, Mercado said these priests left the diocese “for personal reasons like sexual misconduct and fathering children.”

Mercado confirmed that the diocese used to receive P225,000 monthly from the Philippine Sweepstakes Charity Office (PCSO) but that it was he who decided to stop accepting it following a Senate probe on the so-called Pajero scandal that involved some bishops.

The bishop took exception to the report that he allowed Monsignor Bayani Valenzuela to get off the hook for misappropriating some P14-M of St. Andrew’s School in Parañaque.

“Does Mons. Valenzuela’s termination, floating status and exile not constitute punishment? He is no longer entitled to pension and hospitalization. Is this not punishment?”

He did not reply when told that Valenzuela forged the fake resolution supposedly issued by the school’s Board of Trustees for the risky investment. He admitted however that it was a “bad investment.”

Mercado also confirmed that his priests engaged in a heated discussion regarding the controversy during a seminar in April.

We were told that the seminar turned out to be a messy affair, where priests took turns in telling on each other.

Two priests identified with Mercado, Fr. John Paul del Rosario and Fr. Lambert Legaspino, castigated their peers for sending letters to the Nuncio that portrayed Mercado in a bad light.

We reported that Mercado, who was present, left the room and did not come back.

The bishop admitted that he was present but left the meeting before the fireworks started. He said whatever happened in that meeting should have been kept confidential and that “to breach this confidentiality is a betrayal of mutual respect and trust.”

Hinting that the sources of Rappler’s story were his own priests, Meracado accused them of “undermining their own reputation by talking about their own situation as if they are being persecuted.” – Rappler.com