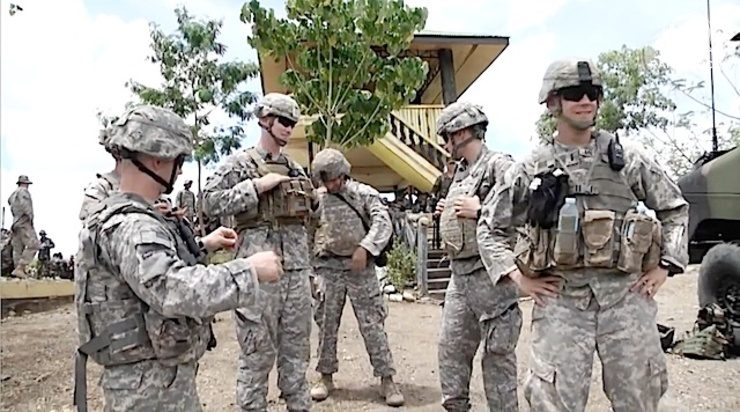 MANILA, Philippines – Defense Secretary Voltaire Gazmin highlighted the role of the US military in the country’s “overall defense strategy” in the wake of a petition filed by lawmakers to terminate the Visiting Forces Agreement (VFA).

“Let us not forget that the VFA is a component of our overall defense strategy and its abrogation now will have an adverse effect on the minimum credible defense posture that we are working hard to achieve,” Gazmin said in a statement on Tuesday, October 28.

Ratified by the Senate in 1998, the VFA allowed the return of American troops to the Philippines after the 1991 Senate vote that evicted US bases in the Philippines. Thousands of Americans are in the country every year for regular military exercises, among other activities.

The October 11, 2014 murder of Filipino transgender woman Jennifer Laude allegedly by US Marine Joseph Scott Pemberton has revived issues against the VFA. Pemberton was among the American soldiers who arrived in the country a few weeks ago for joint exercises with Filipino counterparts.

It’s not the first time that an American serviceman has been implicated in a crime here. In December 2005, charges were filed against US serviceman Lance Corporal Daniel Smith for allegedly raping “Nicole,” a Filipina, also in Olongapo City.

A Philippine trial court convicted Smith, but “Nicole” later recanted her statements leading to his acquittal by the appeals court.

The petition to terminate the VFA is also a hurdle for the new military-to-military agreement between the Philippines and US, the Enhanced Defense Cooperation Agreement (EDCA) that is meant to increase US military presence in the Philippines as a deterrence to the aggressiveness of China in the West Philippine Sea (South China Sea). The Supreme Court is scheduled to hear oral arguments on the constitutionality of EDCA in November. (READ: SolGen to SC: EDCA needed to defend West PH Sea)

(We need help because we cannot face the challenges by ourselves. We are fast-tracking our modernization program and capability upgrade. But as of now, we cannot do it alone.)

Senator Miriam Santiago and Akbayan partylist Representative Walden Bello cited 3 new cases to show that VFA has been disadvantageous to the country: the continuing US custody over Pemberton, the dumping of hazardous wastes in Subic Bay in 2012, and the 2013 USS Guardian grounding of the Tubbataha Reefs. (READ: Miriam Santiago, Bello push for VFA termination)

The VFA provides that Philippine courts will have jurisdiction over US servicemen accused of crimes but custody will remain with the US until the “completion of the judicial proceedings.”

In a motion filed before the Olongapo prosecutor’s office on Monday, October 27, Pemberton’s lawyer said there is no basis for the murder charge against the US Marine. If the case is elevated to court, it should be reduced to homicide, the lawyer added. (READ: US Marine says no basis for Laude murder charge)

Gazmin said the US has shown it is willing to cooperate with Philippine authorities on the Pemberton case.

“It is a work in progress and we should not hastily throw it into the trash bin before it has truly proven its worth. The Laude case has shown that the Philippines and US are willing to cooperate fully with each other within the terms of the agreement. Both sides have also shown their respect for the sensitivities of one another over this incident. That is the VFA at work,” said Gazmin.

The US last week agreed to transfer Pemberton to a detention facility inside the compound of the Joint US Military Assistance Group (JUSMAG) in Camp Aguinaldo, the general headquarters of the Philippine military. It’s considered Philippine soil but the US keeps custody over Pemberton.