Two schools of thought on the Bangsamoro bill 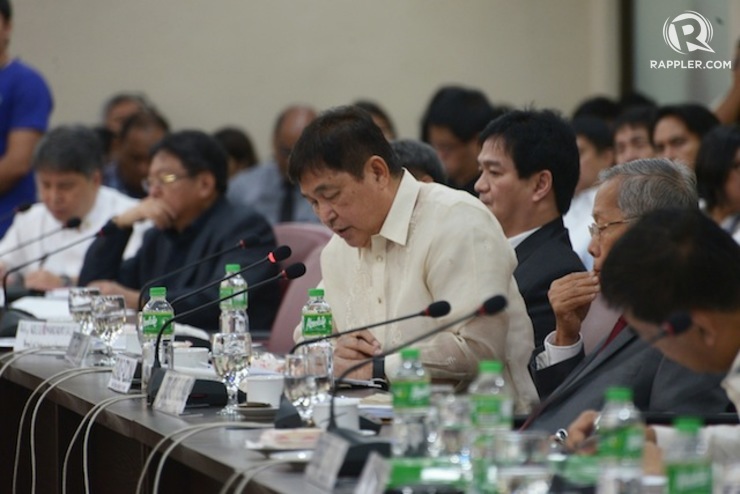 MANILA, Philippines – Concerns over the constitutionality of the proposed Bangsamoro Basic Law (BBL) are centered on these questions: Do you choose to read the Constitution broadly or restrictively? Are you open to the concept of “asymmetrical relationship” between the envisioned Bangsamoro and the central government or are you not?
With these comments, lawyer Oscar Franklin Tan, co-chair of the Philippine Bar Association, summed up the main points of the House ad hoc committee hearing on the bill with former justices and legal experts on Tuesday, October 28. (READ: Legal experts take on Bangsamoro bill)

“I am of the opinion that House Bill 4994 is beyond the powers of the Congress to pass,” Mendoza said.

Azcuna, meanwhile, said the recognition of the Philippine Constitution in the BBL preamble “should lay to rest the concern that the exercise does not mention the Constitution at all.”

Mendoza raised 5 main provisions in the BBL, which he said were unconstitutional.  Azcuna and government peace panel member Chito Gascon – members of the 1986 Constitutional Commission – offered their counter-opinions.

1. Use of the term ‘Bangsamoro territory‘

Mendoza: To call the proposed political entity as a “Bangsamoro territory” is to consider it a separate part of the Philippines although under its jurisdiction. Such a political entity is only a little different to the “associative relationship” of the Bangsamoro Juridical Entity under the MOA-AD. The Constitution does not contemplate any state in the jurisdiction of the state much less does it provide for a transition status that prepares any part of the Philippines for independence.

Azcuna: Bangsamoro means “nation of the Moro.”  It’s a recognition of a nation of people with a distinct culture. There can be many nations within a state. Although it is thinking out of the box, it is not unconstitutional.

2. Use of the term ‘Bangsamoro people’

Mendoza:  Provisions referring to “Bangsamoro people” limit suffrage and membership to the Bangsamoro government to those who ascribe to the Bangsamoro identity thus denying the rights and privileges of national citizenship guaranteed in the national Constitution.

Mendoza: This provision is contrary to the Constitutional provision that the autonomous region should consist of an executive and legislative branch, both of which shall be elective and representative of constituent unit.

Azcuna: Our Malolos Constitution is a parliamentary form of govenrment. This is nothing new. The officials…will still be elected and the government will be democratic. Under the proposed law, while the Chief Minister will be chosen among members of the Bangsamoro parliament and not directly elected by the people, the members themselves will still be elected.

5. General supervision of the Bangsamoro government or the so-called “Asymmetric relationship”

The panels define “asymmetric relationship” as “implying a special status of the Bangsamoro vis-a-vis the central government that is different from that of local governments and administrative regions. The autonomous regions for Muslim Mindanao and the Cordillera contemplated in the Constitution partakes of this special and distinct status and can thus be described as asymmetrical.”

Mendoza: It is the asymmetric relation qualification that waters down the President’s general supervision. This can make the strict enforcement of national laws in the Bangsamoro difficult to secure. The right to self-determination cannot be used to justify this kind of relationship between the Bangsamoro government and the central government.

Azcuna: The “asymmetric relationship” is an attempt to reverse the balance. That is why there is a provision here on transitional justice. Let us let them chart their own course.

Gascon said the right to self-determination can’t be curtailed and is also recognized by many UN declarations.

There is nothing “patently unconsitutional” in the Bangsamoro Basic Law, Ateneo School of Government Dean Antonio La Viña told the committee.

La Viña said Congress can take a risk by passing the law as it is but warned it would be prudent to scrutinize possibly problematic provisions before the proposed law is even questioned in Court.

“I can say with confidence that the current Supreme Court…(adheres) to a strict interpretation of constitutional law. Following that, you might actually want to be prudent. If you have a conservative SC, how can we be sure that we address before that any issues?” La Viña said.

La Viña proposed the inclusion of a definition of terms in the law. He said terms that needed further definition include “asymmetric relationship” and “geographic areas.”

The Bangsamoro Basic Law needs to go through two rounds of voting before it can be passed into law – in Congress and through a plebiscite.

The Aquino administration hopes to finish the transition from the Autonomous Region in Muslim Mindanao to the Bangsamoro before Aquino steps down in 2016.

Watch clips from the hearing below.

Clarita Carlos – Professor, UP College of Social Science and Philosophy