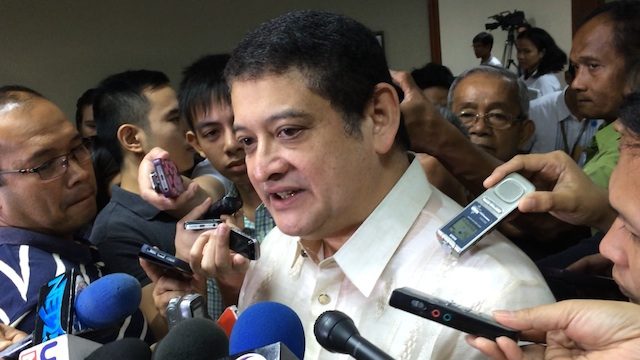 “The Committee on Accountability of Public Officers and Investigations (Blue Ribbon) would like to reiterate our invitation to His Excellency to make an appearance in a public hearing on Thursday, November 6, 2014, at 10 am to be held at the Senate Plenary Hall, 2nd Floor, Senate of the Philippines, GSIS building, Pasay City,” read the letter dated October 28.

Guingona said the Office of the Vice President received the letter of invitation on Wednesday, October 29.

Cavite Governor Juanito Victor Remulla, Binay’s spokesman, said the Senate invitation will be discussed with the Vice President when he returns from his provincial engagements.

“VP is in the Bicol region till the weekend. We will discuss it when he gets back,” Remulla said, when asked if Binay would accept the invitation.

While responding to questions on the planned one-on-one debate between Binay and Senator Antonio Trillanes IV, Remulla said that the Vice President is “booked until the 12th” of November.

On Tuesday, Guingona clarified in a media interview that while he upholds the powers of the subcommittee, the decision to invite Binay to the mother committee is meant to prevent a possible clash between the Senate, the Office of the President, and the Supreme Court – where the Binays earlier threatened to raise their jurisdictional question.

The Vice President’s son, Makati Mayor Jejomar Erwin Binay Jr, had earlier quesioned the jurisdiction of the subcommittee to conduct the probe, but this was dismissed for “lack of merit.”

On Thursday, the Senate Blue Ribbon subcommittee will resume its hearings on the controversial building, which has branched out into other corruption allegations against the Vice President, including ownership of a 350-hectare farm. (IN PHOTOS: The ‘hacienda’ that Antonio Tiu says he owns)

The Vice President has not attended any of the hearings, dismissing the Senate probe as a “kangaroo court” driven by political ambitions in preparation for the 2016 elections. – Rappler.com