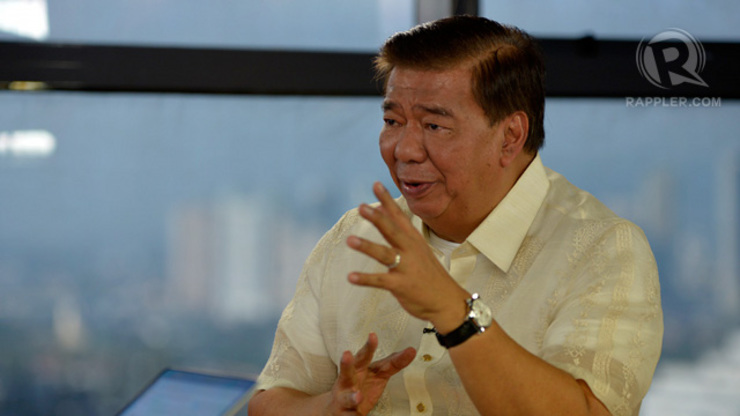 MANILA, Philippines (UPDATED) – Criminal and administrative charges were filed against Senate President Franklin Drilon before the Office of the Ombudsman on Wednesday, October 29, over the alleged overpriced P679.8- million ($15.20 million*) Iloilo Convention Center.

Said to be a pet project of Drilon, the project was partially funded under the Disbursement Acceleration Program (DAP), where certain executive acts had been deemed unconstitutional by the Supreme Court.

In an 18-page complaint-affidavit, Manuel Mejorada accused Drilon of being criminally liable for plunder, malversation of public funds, graft, and violation of the Government Procurement Reform Act; and administratively liable for dishonesty and grave misconduct.

Drilon had earlier filed libel charges against Mejorada, an Iloilo-based columnist and former provincial administrator, for his columns and blog posts on alleged anomalies in the senator’s projects in the province.

“Drilon must be held accountable for the loss of P488 million from the coffers of the Government. He is presumed to have harvested the fruits of the anomalous expenditures way above what can be considered reasonable for the construction of the project,” the complaint read.

To prove his point, Mejorada cited the construction costs of the SM Mall of Asia Convention Center, which was built at a cost of P26,400 per square meter or 4 times more than the P106,226 per square meter cost of the Iloilo structure.

Further illustrating his argument, Mejorado compared the convention center to the 12-storey, 5-star Richmonde Hotel of Megaworld just across it, built only at a cost of P500 million.

“From step one until the present stage of project implementation, it is apparent that his objective was to bloat the costs of the project despite his personal knowledge that it could be prosecuted for a much lesser cost,” Mejorada alleged.

Hilmarc’s is the contractor of the controversial Makati City Hall Building 2, the subject of an ongoing Senate probe.

Mejorada alleged that Drilon’s co-accused “merely carried out” Drilon’s “every wish and command.”

“As proponent of the project, respondent Drilon had the moral authority over the officials of the agencies involved in the project,” he said in his complaint.

Drilon, a stalwart of the ruling Liberal Party (LP), had earlier said that the Iloilo Convention Center was built for the Philippine hosting of the Asia-Pacific Economic Cooperation (APEC) in 2015.

Mejorada maintained that he has no ax to grind against Drilon, who he said “severed” ties with him in July 2011, after he wrote a story implicating the senator in an allegedly overpriced agricultural land the government had purchased as a relocation site.

He said he was not goaded by Drilon’s political foes to file the complaint and that his “personal friends” helped defray his expenses in filing the complaint before the Ombudsman.

It was Mejorada’s fourth graft complaint against Drilon, who accused him of “harboring hatred” against him for sacking him and not giving in to his requests for a government position.

“There is no overprice. The ICC costs P63,893.11 per sqm, not P106,226 per sqm which he claims. The building is 28-meters high and designed without any columns but with long span beams and glass curtain walls,” said the Senate President, who expressed confidence that the complaint would not prosper.

Drilon countered that the building will be completed by March 2015 at a cost of P700 Million. He said that based on Mejorada’s claim that the project is overpriced by P488 Million, the supposed cost is only P212 million for an 11,693.79-square meter (sqm) convention center.

“If you do the math using his assertions, the ICC will then have to be built at a cost of P18,129.28 per sqm, which is an impossibly low amount for a modern structure that aims to draw local and international guests for large-scale conventions and other important events,” he said. – Rappler.com