Yolanda a year after: No major disease outbreaks recorded

Oct 29, 2014 9:22 PM PHT
Jee Y. Geronimo
Facebook Twitter Copy URL
Copied
'That really is quite remarkable. A typhoon of this level of devastation, you would expect to see disease outbreaks,' says WHO's Julie Hall. Still, she warns that communities in affected areas remain vulnerable 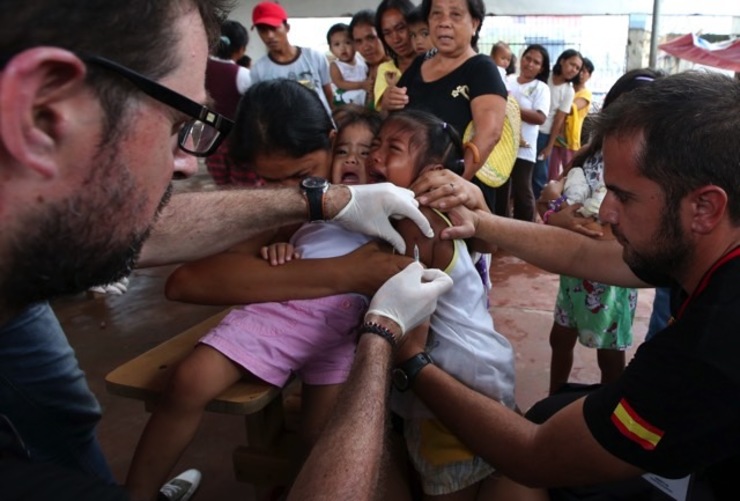 MANILA, Philippines – Super Typhoon Yolanda (international name Haiyan) may have damaged many health facilities in the Philippines, but the country’s health system was still prepared enough to prevent any major outbreak in the affected areas.

This was the observation of Julie Hall of the World Health Organization (WHO) almost one year after the strongest typhoon in recent history hit the Philippines.

“Overall, we did not see any major outbreaks of communicable diseases in the Yolanda-affected areas. And that really is quite remarkable. A typhoon of this level of devastation…you would expect to see disease outbreaks,” said Hall, WHO representative in the Philippines.

The smaller outbreaks, like measles and diarrhea, were managed quickly, while lower cases of dengue were seen after Yolanda because of community initiatives to clean up and get rid of mosquito breeding sites.

Children were also immunized for measles and polio, while 300,000 dogs were vaccinated against rabies.

But what impressed the rest of the world, Hall said, was the use of text messaging to alert authorities about possible outbreaks – something that helped prevent any major outbreaks from happening.

“Many of the foreign medical teams that came were amazed by the resilience of the Filipino people, but also the level of preparedness in the health system, and particularly, the SPEED system, the use of text messaging to be able to alert if there was a rise in dengue cases or a rise in measle cases,” she added.

SPEED, or Surveillance in Post Extreme Emergencies and Disasters, is an early warning system created by WHO and the Department of Health that aims to detect early potential disease outbreaks during post-disaster situations.

Despite the “remarkable” achievement, Hall warned that people in Yolanda-affected areas remain vulnerable to potential outbreaks – especially children – so sustaining what has been done is important.

“Considering it’s been only one year, and the level of damage, things have actually moved quite quickly. But they need to continue to move at that level of speed moving forward, and the problem after a disaster and after a one year anniversary is it can all quickly be forgotten,” she added. – Rappler.com