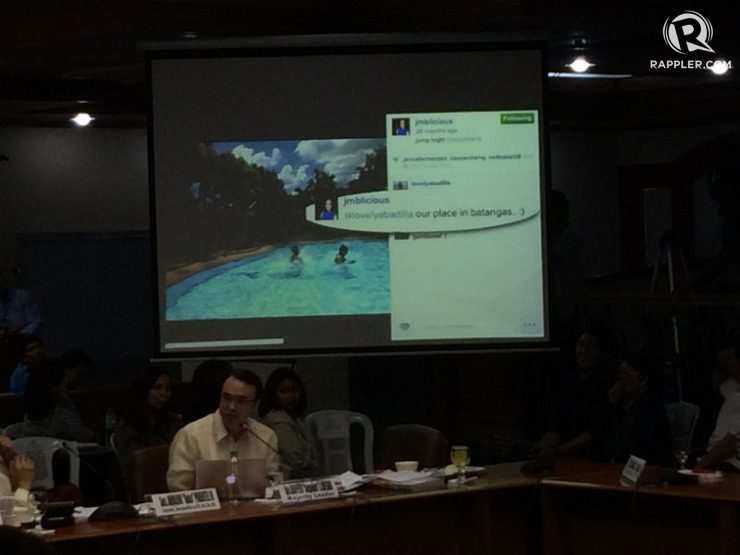 MANILA, Philippines –  “Our place in Batangas,” read a post on social media to accompany a photo of the pool in the so-called “Hacienda Binay” in Rosario, Batangas.

Senator Alan Peter Cayetano on Thursday, October 30, cited the photo and the caption on the Instragram account of Joanna Marie Binay, the youngest daughter of Vice President Jejomar Binay, as “proof” that the Vice President owns the controversial property in Rosario, Batangas.

Cayetano flashed photos taken from Joanna Marie’s Instagram account at the latter part of a Senate Blue Ribbon subcommittee probe into corruption allegations against the Vice President. The account, with the handle @jmblicious, has since been closed.

In a series of photos geo-tagged to have been taken at Rosario, Batangas, the youngest Binay was shown enjoying their “place in Batangas.”

On December 25, 2013, Joanna Marie posted a photo taken at the Batangas property main house with the caption, “Family Dinner in Batangas.”

The posts run counter to assertions of  the Vice President that he does not and never owned the controversial estate in Batangas. Businessman Antonio Tiu has since claimed ownership of the estate, which he calls Sunchamp Agri-Tourism Farm.

Another photo shows the Vice President himself enjoying a round of karaoke in the same house.

In a statement on Thursday, Binay’s spokesman Cavite Governor Juanito Victor Remulla dismissed the “weight” of the photos.

“Nag-videoke lang, may-ari ka na? (You just used the videoke, and you’re already the owner?) The Vice President and his family have been open about using the facilities and visiting Rosario. For one, Dr Binay has a flower farm there. But these photos, like previous photos shown by Senator Cayetano, are not proof of ownership,” Remulla said. – Rappler.com