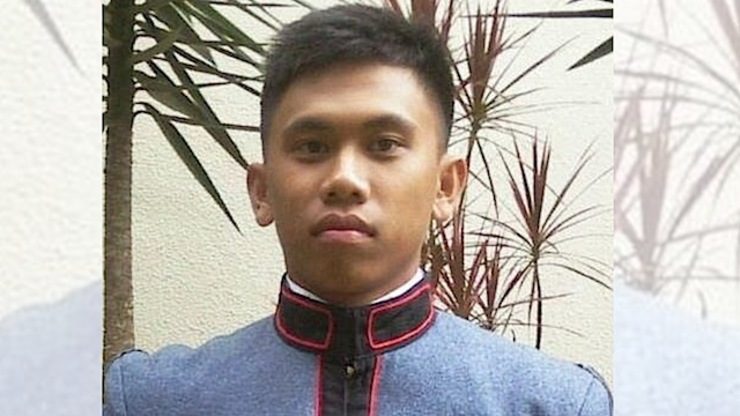 Facebook Twitter Copy URL
Copied
Soldiers die in battle all the time. But 2Lt Jun Corpuz was too young. He won't make it to his first alumni homecoming in February 2015

MANILA, Philippines – It was only in March when 222 members of Philippine Military Academy “Siklab Diwa” Class of 2014 were throwing their graduation caps to celebrate the completion of their 4-year military courses. It was a moment when the class seemed oblivious to the controversy that gripped the nation back then – the dismissal of their classmate Cadet Jeff Cudia.

Soldiers die in battle all the time. But Corpuz was too young. He won’t make it to his first alumni homecoming in February 2015. He’s never even had a girlfriend, according to his mother Elizabeth. “I thought I poured out all my tears yesterday. He was a good boy. He was never a headache. I will not forget him,” an emotional Elizabeth told Rappler in Ilocano on Monday, November 3.

Jun was very close to his parents, who live in Bacnotan town in La Union. He spoke with them several times a day, thanks to the unlimited call promos by the networks. It was the birthday of his father Crecensio just last week, October 27, and Jun sent him a cash gift of P2,000.

He always told his parents not to worry about him. “Mas tahimik sa Basilan kaysa sa Sulu (It’s more peaceful in Basilan than in Sulu),” Elizabeth recalled Jun telling them.

He also spoke with them an hour before the 7:30 am attack on Sunday. It was a typical call. She was having her coffee and she was making sure that Jun had breakfast. She would learn about her son’s death early in the afternoon.

Jun was a platoon leader of Alpha Company, 64th Infantry Battalion, 1st Infantry Division. It was his first assignment.  And 5 of his men also died:

They were conducting routine patrol in Libug Village of Sumisip town to secure construction workers in the Basilan Circumferential Road, a 64-kilometer road that has seen so many clashes between the military and the bandit group notorious for its kidnapping activities. The circumferential road cuts through hilly and forested areas in Basilan. “My soldiers are securing the Basilan Circumferential Road Project to ensure its timely completion before the end of this year. I am saddened that this senseless violence against our soldiers who are helping deliver public service to the people happened,” said Colonel Rolando Joselito Bautista commander of the 104th Infantry Brigade.

Patrolling on foot, Corpuz’s platoon saw a high ground that could be used as a staging ground for attacks. They decided to go and clear the bushy part of the hill, said Army spokesperson Lieutenant Colonel Noel Detoyato.

But the Abu Sayyaf got there first. “While climbing the hill, we saw a man who hurriedly left away from the crest. All of a sudden our leading elements were heavily engaged in an intense firefight, hitting some of them,” Sergeant Marvin Paragoso was quoted in the blog of the military spokesperson. He is one of Corpuz’s men who survived the attack.

Corpuz and his men fired back, but Paragosa said they were overwhelmed. The Sergeant jumped for cover and radioed for reinforcements. Paragosa said he saw Corpuz still firing his gun at the attackers as he leaped for safety.

Corpuz chose to die fighting with his men than take the opportunity to escape.

Half an hour later, the reinforcements arrived. They found the bodies of the 6 soldiers.

Jun’s path to the military is common among PMA graduates. It was his dream to become a soldier because he was inspired by a relative – one of his uncles – who joined the military.

Coming from a poor family, his allowance as a cadet and later his salary as a soldier allowed him to augment his father’s income. He helped put food on his family’s table and put his siblings to school.

Before his death, Jun also paid for his mother’s debts. He took a loan last month, said Elizabeth. There’s extra to start a small business, but Elizabeth said she may have to use the money to pay the schools now that they cannot depend on Jun’s monthly salary anymore.

Perhaps he should have sought for cover when he saw that they were overwhelmed? “If you’re a fresh graduate, there’s usually that little hero in you raring to go out to test yourself and apply what you learned,” explained Army spokesperson Lieutenant Colonel Noel Detoyato.

But Jun wasn’t so lucky. The Abu Sayyaf overwhelmed them in numbers. Down the hill, Jun and his men were at a disadvantageous position.

Philipine Army chief Lieutenant General Hernando Iriberri has ordered a probe into the incident in Basilan. “It is a tragedy. We are saddened by that. We condole with the family of those who were killed yesterday,” Iriberri said on Monday, November 3.

The Army also committed assistance to the family. Detoyato said they are entitled to burial benefits, special financial assistance, and pension because they died in the line of duty.

The military in October stepped up law enforcement operations against the Abu Sayyaf to rescue at least 10 more remaining hostages. In the wake of Jun’s death, President Benigno Aquino III reiterated his commitment to wipeout the Abu Sayyaf.

Jun has done his part. – Rappler.com