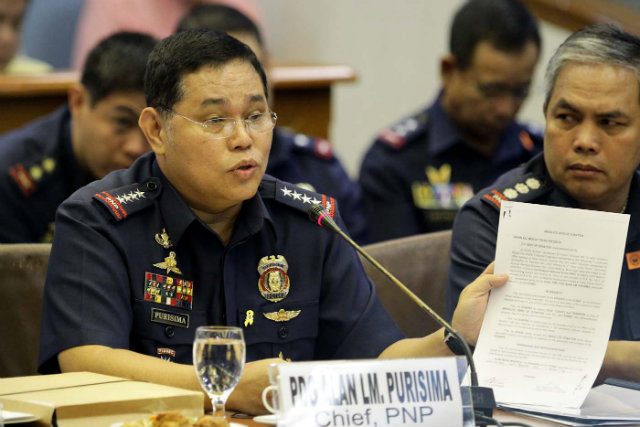 Facebook Twitter Copy URL
Copied
As the Ombudsman begins its investigation into the first plunder case against PNP chief Alan Purisima, a Senate committee raises more questions about 'gifts' he has received while in office

MANILA, Philippines – Instead of giving answers and putting a closure to the issues hounding him, the Philippine National Police (PNP) chief’s appearance before the Senate seems to have raised even more questions.

In a report submitted to the Senate President on Thursday, October 30, the Senate committee on public order and dangerous drugs raised concerns over some “gifts” PNP chief Director General Alan Purisima received in the two years he has been the country’s top cop.

In a hearing held almost two months ago, Purisima said he received a huge discount for a 2013 Toyota Land Cruiser.

He also said the controversial new “White House,” the PNP chief’s official residence in Camp Crame, was a donation from his friends who also happened to be contractors. Purisima, however, clarified that his donors did not have projects with the PNP. While saying that it is not “concluding or surmising that the PNP Chief violated any law regarding the discount he obtained for the 2013 Land Cruiser and the donation of the White House,’” the committee urged the Ombudsman to check if Purisima had violated laws banning government official from receiving gifts.

Purisima faces at least 3 plunder charges over an allegedly shady PNP deal, the White House, and the alleged “underdeclaration” of a property in Nueva Ecija.

“The substantial amount of discount given for the Toyola Land Cruiser which was way above industry practice indubitably amounts to a gift or donation in favor of the Chief PNP presumably by reason of his office,” the report, which was submitted signed by Senator Grace Poe, said.

The donations made for the “White House,” the report noted, also “invites a deeper investigation by the Ombudsman regarding rules on ethical standards.”

More about the ‘White House’

Right after Purisima testified before the Senate, he opened his controversial Nueva Ecija home to media, in hopes of quelling any more doubts surrounding the property. But it’s the “White House” that Poe wants the Ombudsman to check.

“It is important to know if the PNP Chief solicited for such funds or such were voluntarily offered [or] given to the PNP,” said Poe.

Although the 3 donors – also owners of construction firms – did not have projects directly with the PNP, two have made billions in government projects.

Carlos Gonzales of ULTICON Builders and Alexander Lopez of Pacific Concrete Corporation made a combined P6.4 billion ($141.7 million)* from government projects between 2009 and 2014.

Almost all of ULTICON and Pacific Concrete’s projects were with the public works and highways department.

According to the report, it was important to know if the donors, Purisima, or “any other top PNP official” made the decision to channel over P12 million for the construction of the new official residence.

“The answer to the foregoing questions will determine if the above-enumerated laws were violated and it will likewise how how the PNP chief exercised his discretion as a leader in possibly prioritizing the construction of the White House despite the dilapidated PNP dormitory, cramped PNP housing projects, decrepit police stations and insufficient supplies for PNP personnel and units, among others,” the report read.

Purisima earlier told senators that he saw nothing wrong with accepting donations for the construction of the new “White House.” He also emphasized he would not be the sole beneficiary of the new house.

Once he retired, he said, succeeding police chiefs would be able to live there as well.

Poe earlier called on the Ombudsman to check “disparities” in the Statement of Assets, Liabilities, and Net Worth (SALN) of Purisima. “The amount of total monthly amortizations for his luxury vehicles…appear to be substantial even if the combined net monthly salaries of the Purisima spouses are reckoned with.”

Purisima has also admitted to using a bullet-proof SUV lent by his friends.

The report noted the Office of the Ombudsman “is the proper venue to afford [Purisima] the chance to fully clear himself of the allegations,” noting “this Committee does not have the jurisdiction to prosecute any public official for any wrong-doing or transgression of any law.”

The Ombudsman has since ordered a special panel to hold the preliminary investigation for the first plunder raps against Purisima over an alleged anomalous contract with Werfast Documentary Agency, which was tasked to deliver gun licenses for the PNP’s Firearms and Explosives Unit.

In a tweet, Purisima said they “respect the recommendation of Sen Poe.” “We will answer charges once required by the Ombudsman to do so,” the PNP chief said.

Despite the storm of accusations against him, Purisima continues to enjoy the trust of President Benigno Aquino III, his friend. The PNP chief has also spent the last few months going around different police camps. – Rappler.com