Draft coco levy EO may be with Aquino before end-Nov 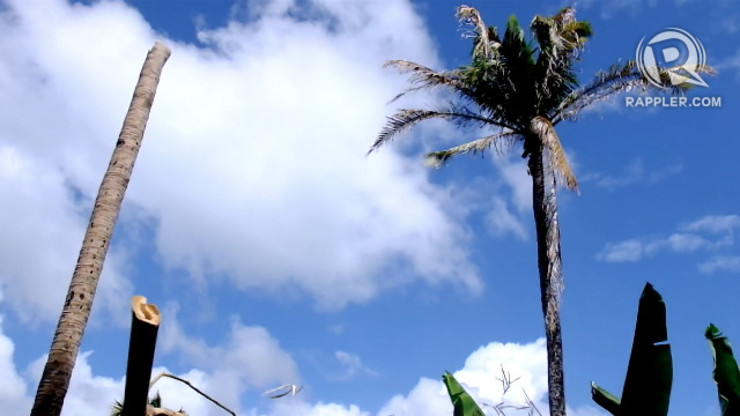 “We are prepared to present a draft executive order for the consideration of the President that shall allow for the use of the levy interest income for programs that would directly benefit the coconut farmers,” Pangilingan told Rappler in a text message on Tuesday, November 4.

The Philippine Coconut Authority, one of 4 agencies originally attached to the Department of Agriculture but now under Pangilingan’s supervision, is working on the draft EO.

There is around P71 billion (US$1.6 billion) in the National Treasury and the United Coconut Planters Bank (UCPB) that the Supreme Court, in 2012, declared must be used to uplift the lives of Filipino coconut farmers, one of the poorest sectors in society according to the National Anti-Poverty Commission (NAPC).

Pangilinan’s  statement comes in the middle of a 71-day march by 71 coconut farmers walking 1,075 kilometers from Davao City in Mindanao to Malacañang Palace in Manila.

Now in Naga City, Bicol, the farmers are expected to arrive in Malacañang Palace on November 26 to reiterate their call for Aquino to mobilize the funds for their sake.

They are asking Aquino to issue an executive order creating a Perpetual Coconut Farmers Trust Fund and coordinating council that will ensure that the P71-billion coconut levy goes to programs that will directly benefit coconut farmers and boost the coconut industry.

They also want him to certify as urgent the passage of a bill creating the trust fund. The group has already filed a people’s initiative bill in both houses of Congress.

The group wants action this year because by 2015, preparations for the 2016 elections make it unlikely for such bills to prosper, said Ed Mora, chairperson of Kilus Magniniyog, the group of coconut farmers marching to Malacañang.

The group began their campaign for the coco levy funds during the martial law years under then president Ferdinand Marcos, of whom Pedro Cojuangco was a known crony.

“Pangalawang yugto na ito. Palagi kaming nabibigo sa pag-asa na sana magkaroon ng tugon na maliwanag ang pamahalaan para sa magniniyog (This is the second chapter. We are always losing hope that the government will have a clear response to the needs of the coconut farmer),” he said.

The P71 billion represents the shares formerly owned by San Miguel Corporation that the Supreme Court declared as rightfully belonging to the government in 2012.

The government agency used it to compensate Cojuangco after it bought UCPB (formerly First United Bank) stocks from Cojuangco’s uncle, Pedro Cojuangco, in 1975.

The stocks were bought using funds form the coconut levy paid to the government by Filipino coconut farmers, under the impression that the government would use the funds for programs meant to improve their lives and the industry.

The 2012 Supreme Court decision, after decades of legal battles, declared that the SMC shares are “owned by the government to be used only for the benefit of all coconut farmers and for the development of the coconut industry.”

But two years later, the funds are yet to be used for this purpose, even as coconut farmers remain impoverished and are only beginning to emerge from a coconut pest outbreak in Luzon.

“The silence of the President is frightening. There is nothing stopping the government from using the funds for coconut farmers. The funds have been sleeping for two years,” said Mora.

Kilus Magniniyog, in their draft executive order sent to Aquino, outlined how they want the coconut levy funds to be used.

They want the P71 billion to be used as principal with only the annual interest, around P3 billion ($66.7 million) based on their estimates, to be used for government programs.

These programs must directly benefit coconut farmers and not for other programs funded in the government’s budget such as farm-to-market roads and crop development roadmaps.

They want programs that will assist coconut farmers by increasing the productivity of the coconut industry and the development of coconut-based enterprises and other anti-poverty programs.

One concrete project they mentioned is the establishment of “village-level integrated coconut hubs” with processing facilities. These hubs would allow coconut farmers not only to harvest raw materials from coconut trees but also make them into products which they can sell at a higher value.

The hubs will be shared by communities and will be accessible to all farmers in the village.

They will veer away from traditional copra-making which, according to the group, “was promoted by the coconut monopoly” during the Marcos years and “wasted much of the real potential of coconuts keeping millions of coconut farmers in dire poverty.”

Though Pangilinan has a copy of the groups’ draft executive order, he gave no assurances that the draft to be presented to Aquino would be the same one.

“We are doing our best to accommodate their inputs as well as that of other farmers’ groups,” he told Rappler.

In Congress, Senator Cynthia Villar has already filed a similar bill which, aside from creating a trust fund, establishes a Coconut Farmers and Industry Development Plan.

Villar, who chairs the Senate Committee on Agriculture and Food, has already called a hearing on the bill and targets a committee report before the end of 2015.

In the House, AAMBIS-OWA party-list Representative Sharon Garin filed a similar bill but the Committee on Agriculture, headed by Representative Mark Llandro Mendoza of the 4th District of Batangas, is yet to act on it.

Even if the 2012 court decision is final and executory, only a bill can establish a trust fund, said Pangilinan.

Farmer groups also want a bill to ensure the funds will stay intact despite changes in administration.

“An EO can be changed by just one signature from the next president, unlike a law that goes through Congress. We can prevent a clamor to amend the law,” said Erin Tañada, a former congressman who has also been supporting farmers’ claims on the coco levy funds. – Rappler.com