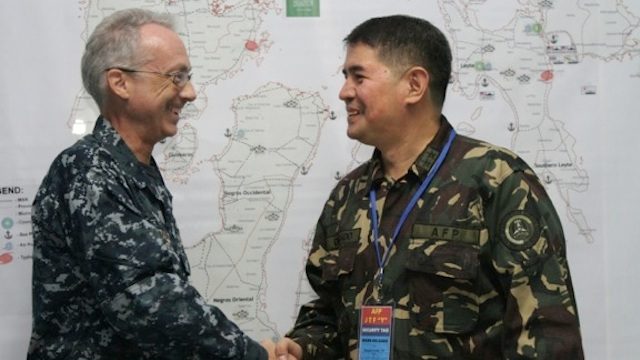 Facebook Twitter Copy URL
Copied
Unlike other countries, the US can immediately deploy its troops to the Philippines to assist the country in times of need

MANILA, Philippines – Amid calls to scrap the Visiting Forces Agreement (VFA), the typhoon Yolanda (Haiyan) experience offers an argument in favor of the treaty that allows the rotating presence of US troops in the Philippines: US troops were among the first responders in the aftermath of the monster typhoon.

The statement was backed by a Philippine military officer who was involved in the Yolanda operations.

“In terms of providing assistance, I would argue that a substantial portion of the assistance belong to the US,” said former Armed Forces of the Philippines Central Command (Centcom) chief Lieutenant General Roy Deveraturda, who was on top of the operations in the Visayas.

Deveraturda recalled how a survey team from the US military joined Philippine disaster management officials in the first Philippine C130 cargo plane that landed on Tacloban City a day after the onslaught, to assess what kind of deployment would be needed.

US military aircraft from nearby countries immediately flew in and started making sorties between the Philippine Air Force headquarters in Pasay City and Tacloban City to bring in relief assistance to the devastated areas and bring out typhoon victims who opted to seek shelter with relatives in Luzon.

“The first 48 hours are crucial. It’s a small window and if we miss that, more people will die. Considering the magnitude of the damage, we needed all the help,” said Deveraturda.

The US also provided the radar and fixed facilities at the Tacloban City airport to allow night landing.

“Other countries wanted to immediately respond to the Philippines’ call for help, but had to wait as their governments worked out legal agreements for their troops (foreign soldiers) to work in the Philippines,” the US Embassy added.

There used to be US bases in the Philippines that hosted tens of thousands of US troops  but in 1991, the Philippine Senate voted to evict them. US troops were able to return to the country after the Senate in 1998 ratified the VFA to allow rotating presence of US troops for military exercises, among other activities.

Calls to scrap the VFA were revived because of the murder of transgender Filipino woman Jennifer Laude, allegedly in the hands of US Marine Joseph Scott Pemberton who was in the Philippines for regular military exercises, under the VFA.

The murder case is a reminder of what critics say is a poorly negotiated treaty with the US. The VFA gives the US custody over erring US servicemen until the “completion of the judicial proceedings.” While the VFA allows the Philippines to request custody in “extraordinary cases,” it doesn’t define what falls under the phrase, and is subject to US approval.

In comparison, the treaty with Australia – the Status of Visiting Forces Agreement (SOVFA) – gives the Philippines custody over foreign troops during the trial period.

Deveraturda joined the government’s call for sobriety in the middle of the VFA debate. “Sometimes we prematurely judge the validity of the [agreement] because of a single incident – a very personal incident. I am not an apologist for the US. But we have to see the whole picture. We have to be objective,” he said.

“If there’s some crisis, just like what happened in Yolanda, history will tell you that the US is a reliable ally,” he added.

The controversy over VFA also happens as the two countries are preparing to expand their military relationship through the Enhanced Defense Cooperation Agreement (EDCA), a military-to-military agreement signed in April to allow not just troops but assets in “agreed locations.” (READ: EDCA, Olongapo murder, and the old case of Daniel Smith)

The calls to scrap VFA also puts in danger the new agreement, which the government claims to be a mere implementation of the VFA and the Mutual Defense Treaty. Critics argue, however, that EDCA is “de facto basing.”

Petitions were filed before the Supreme Court to question the constitutionality of EDCA. Oral arguments are scheduled on November 18. – Rappler.com