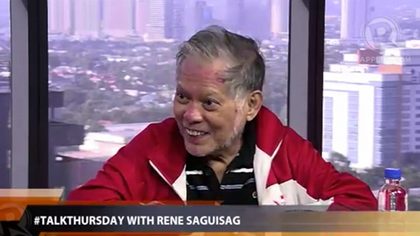 One of the proponents of the law on Statement of Assets, Liabilities and Net Worth (SALN) described as comical the High Court’s guidelines on the release of justices’ SALNs.

In an interview on Rappler’s #TalkThursday on June 21, former Sen Rene Saguisag said the new guidelines of the Supreme Court do not live up to the spirit of the SALN Law or RA 6713, which he helped draft. (Watch the full interview here).

“Kengkoy itong resolution sa SALN,” Saguisag said. “Niloloko lang tayo ng mga mahistrado. Wala naman palang access din.” (This resolution on the SALN is comical. The magistrates are just fooling us. It turns out there is still no access.)

On Wednesday, June 20, the Court released its guidelines for the release of justices’ SALNs, curriculum vitae and personal data sheet. The guidelines require requesting parties to state their specific purpose, with their requests subject to the approval of the court en banc.

Members of the media must show proof of accreditation while non-journalists must prove that their requests “go beyond pure or mere curiosity.” Requests are also generally limited to justices’ latest SALNs.

Saguisag said, “Our intention when we drafted 6713 is you have the right to know and when you ask me to issue my SALN, I should say, ‘Here it is. What else can I do for you?’”

“If you filed a truthful SALN, how can it ever be used against you? That’s why to me if their implementation is comical, it’s useless. They’re amending our law and who are they? They are unelected magistrates meddling with the work of elected representatives,” he added in a mix of English and Filipino.

Saguisag also weighed in on the search for the replacement of former Chief Justice Renato Corona.

He welcomed the decision of the Judicial and Bar Council (JBC) to televise the public interviews of the candidates. He said one question must be asked of applicants.

“Is there anything about your past or your background that if exposed would embarrass and humiliate all of us?”

Saguisag, however, is against calls for the JBC to also make public its deliberations and voting for the shortlist of Chief Justice candidates. He said JBC members may have reservations about playing devil’s advocate if their meetings are televised.

“Like in Supreme Court deliberations, executive sessions, Cabinet meetings, it’s just us so there is more candor, there is more liberty because you don’t want to be quoted that you are the one criticizing there. That may moderate the debate to the prejudice of the public,” he said.

He said, though, that it is a positive development that the JBC is moving away from its secretive culture. Saguisag even burst into song to illustrate his point.

Saguisag said he also prefers that President Benigno Aquino III appoint a Chief Justice who is not young enough to serve for decades.

“Because how about the more senior ones? There are not just justices but deserving candidates who will be there maybe for 5, 10, 15 years.”

Saguisag added that he does not mind if Aquino appoints an outsider. He has nominated Supreme Court Associate Justice Roberto Abad and former Executive Secretary and San Juan Rep Ronaldo Zamora to the post. (Read: Carpio’s penance? Wait for 2 years – Saguisag)

What is important, he stressed, is for the President to appoint a competent Chief Justice among the 50 nominees and counting.

“I’m looking at the 50 names or so and I am having a difficult time looking for a superior bet.”