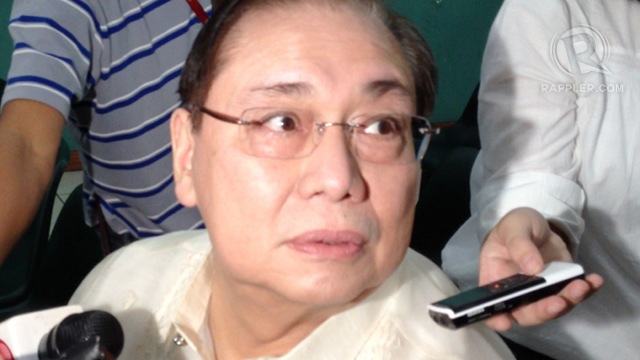 MANILA, Philippines – Jose Miguel Arroyo on Friday, June 22, asked the Office of the Ombudsman to recall his indictment for graft concerning allegations of his involvement in the sale of two second-hand helicopters passed off as brand new to the Philippine National Police in 2009.

In his 17-page Motion for Reconsideration filed through lawyers Edna Herrera-Batacan and Mark Anthony Bayquen, Arroyo reiterated that he was not the owner of the second-hand helicopters that were sold to the PNP by the Manila Aerospace Products Trading Corp (Maptra).

The respondent, husband of former President now Pampanga Rep Gloria Macapagal-Arroyo, said his inclusion in the case was merely based on a “speculative conclusion” that he was the owner of the choppers even if documents submitted to the Ombudsman showed Maptra purchased the aircrafts from Lion Air Inc.

Reciting the history of the choppers, Arroyo said it was not his money but that of Lourdes T. de Arroyo Inc. (LTA Inc.) that was used to partly pay for the choppers when they were first acquired by Lion Air from Robinsons Helicopter Corporation in 2004.

He insisted that LTA Inc. only leased the choppers from Lion Air which he identified as the owner based on import permits issued by local aviation authorities, aircraft invoices from Robinsons, airworthiness and export certificates from the US Federal Aviation Administration and the deeds of sale registered with the Civil Aviation Authority of the Philippines.

According to him, Maptra purchased the choppers from Lion Air in 2009 and sold them to the PNP.

“Considering the numerous documentary and testimonial evidence showing that Mr. (Archibald) Po (president of Lion Air) transacted with LTA Inc., the substitution made by this office of respondent Arroyo’s name in place of LTA Inc., reeks of political color,” his lawyers said.

The defense said Arroyo had already divested himself of his entire holdings in LTA Inc. in favor of Benito Araneta way back March 15, 2001 – three years before the choppers were delivered to the country by Robinsons Helicopters.

In addition, Arroyo’s legal team pointed out that the 2004 and 2009 general information sheet filed by LTA Inc. to the Securities and Exchange Commission showed he was not a director, an officer or even a stockholder of the company.

The same documents listed his brother, the late Negros Occidental Rep Ignacio Arroyo, as LTA president and Araneta as chairman.

“The speculative assumption of ownership …could not prevail over the overwhelming evidence of ownership on the part of Lion Air. It is clear from the records that the transaction of Mr. Po was with LTA Inc. and not with respondent Jose Miguel Arroyo personally,” the defense stressed. – Rappler.com