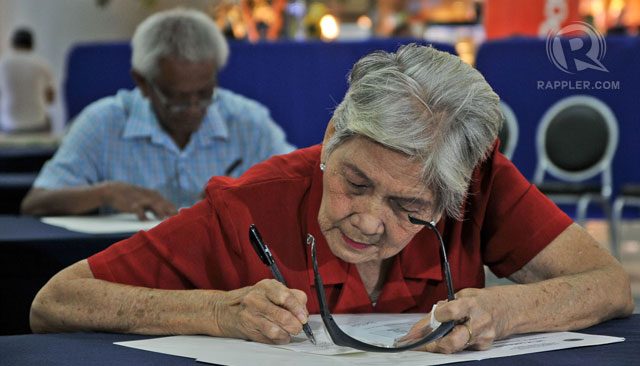 MANILA, Philippines – Under a new law, over 6 million senior citizens in the country can avail of health benefits enjoyed by Philippine Health Insurance Corporation (PhilHealth) members just by presenting their valid identification cards to hospitals, the main author of the measure said on Tuesday, November 11.

President Benigno Aquino III signed  Republic Act (RA) 10645 on November 5, amending RA 9994 or the Expanded Senior Citizens’ Act of 2010 by removing the qualification that a senior citizen has to be an indigent before being covered by PhilHealth.

About 6.1 million senior citizens, or those 60 years old and above, will benefit from the law, said Senate President Pro Tempore Ralph Recto. (READ: Senate OKs giving insurance to all senior citizens)

(They only have to show an ID that will prove they are senior citizens, and they can receive from the hospital the corresponding benefits due PhilHealth members.)

In his sponsorship speech on the measure, Recto had said that the ideal situation “is that the minute [senior citizens] blow out the candles on their 60th birthday cake to the moment they breathe their last – they should be PhilHealth members.”

To ensure implementation, the necessary funds will be sourced from the National Health Insurance Fund of PhilHealth, which is from proceeds of RA 10351 or the Sin Tax Reform Act of 2012.

Recto said that as of December 2013, PhilHealth has 31.27 million registered members and 45.63 million dependents. For 2014, the target of PhilHealth is to provide health insurance coverage to more than 90% of Filipinos.

Also on Tuesday, Senator Teofisto Guingona III said the passage of the bill is “an early Christmas gift to the country’s elders.”

Guingona sponsored the measure as chair of the Senate Committee on Health and Demography.

To date, Guingona said only 3.94 million senior citizens are covered by PhilHealth, either as indigent, sponsored, lifetime member, or dependent. The law guarantees sufficient access to medical and health care to all senior citizens.

“It is high time that we give back to our country’s elders. In our culture, the condition and situation of a person in his or her advanced age is the reflection of the character of his or her children. How we take care of our senior citizens is also a mirror of our character as a nation,” he added. – Rappler.com