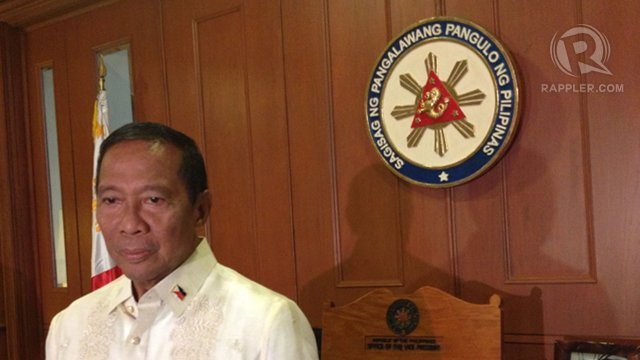 MANILA, Philippines – Vice President Jejomar Binay on Saturday, November 15, took a step back from his verbal tussle with his political foes and made no mention of them or his defense against corruption allegations at a Boy Scouts of the Philippines (BSP) event.

Addressing the Special Court of Honor held at the BSP building in Manila, Binay, the BSP national president, stuck to the theme of the event – honoring exemplary Scouts – and veered away from any reference to political issues and controversies involving him and his family.

It was a departure from his speech on November 7 when, addressing his fellow scouts in a speech entitled, “The Brotherhood of Joy,” he could not help but lament that his political enemies were trying to “crucify and punish” him, apparently in reference to the Senate inquiry into the alleged overpriced Makati City Hall Building 2.

A week later on Saturday, Binay kept to his prepared speech and cited the significance of convening the court, which is “to bestow awards that are not easily earned, and recognizes the distinctive heroism of scouts who have exceeded the lofty bar of the virtues by which the Scouting Movement stands.”

In between the two BSP events, Binay backed out of his own proposed debate against Senator Antonio Trillanes IV, saying he did not want to be portrayed as a “villain” bullying the senator.

In an impromptu speech at a Kapisanan ng mga Brodkaster ng Pilipinas event on November 13, where he was not expected, Binay also adopted a calm tone and limited his explanation to why he had backed out of the debate that he had asked the group to facilitate. (READ: Binay apologizes to KBP for backing out of debate) – Rappler.com