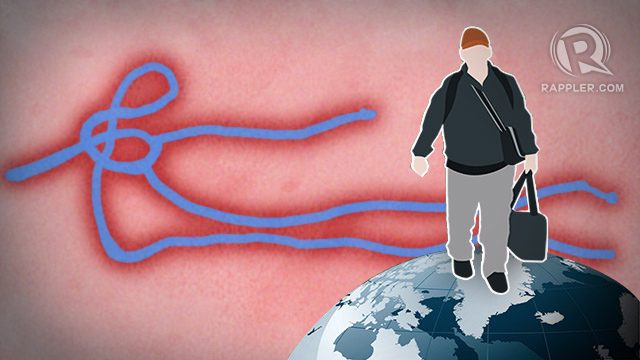 MANILA, Philippines – The Department of Health (DOH) on Tuesday, November 18, said it will quarantine all overseas Filipino workers (OFWs) who will be coming home from Guinea, Liberia, and Sierra Leone – the epicenter of an ongoing Ebola outbreak.

“The initial plan is mandatory, pero siyempre pakiusap ang mangyayari dun (but of course we will end up just requesting them). There might be resistance – yes, we expect that – but we also believe that if we can explain to them properly the rationality behind this…wala pong magiging problema (there won’t be any problem),” Acting Health Secretary Janette Garin said in a press briefing Tuesday, November 18.

Bureau of Quarantine and International Surveillance Director Ferdinand Salcedo said they are currently preparing a place of quarantine for the OFWs, but Garin said it will not be on Caballo Island in Cavite City, where 133 Filipino United Nations peacekeepers are currently staying.

“Chances are it will be in a different place, because [Caballo Island] is restricted for the military,” she added.

The peacekeepers, who initially tested negative for Ebola, arrived last November 12 and are currently under a 3-week precautionary quarantine on Caballo Island.

One of them tested positive for malaria.

The decision to quarantine OFWs comes as the government prepares to raise alert level 3 – voluntary repatriation – over the 3 West African countries “effective mid-November 2014.”

Garin said the mandatory quarantine will protect OFWs from stigma and will assure Filipinos that DOH is “bent on maintaining” the country’s Ebola-free status. (READ: Fast Facts: Ebola)

“But we are awaiting response from the Department of Foreign Affairs. As the situation is now, kaunti lang po ang gustong umuwi (only a few OFWs want to return home).” she added.

The Ebola virus, which can be transmitted through bodily fluids, causes severe fever, muscle pain, weakness, vomiting, and diarrhea. In some cases, it also causes organ failure, unstoppable bleeding, and can kill victims in just days. (READ: 5 misconceptions about Ebola)

The World Health Organization said on Friday, November 14, that the 2014 Ebola outbreak has already killed 5,177 people from 14,413 cases, mostly in Guinea, Liberia, and Sierra Leone. – Rappler.com