Garin under fire over DOH ‘revamp’ 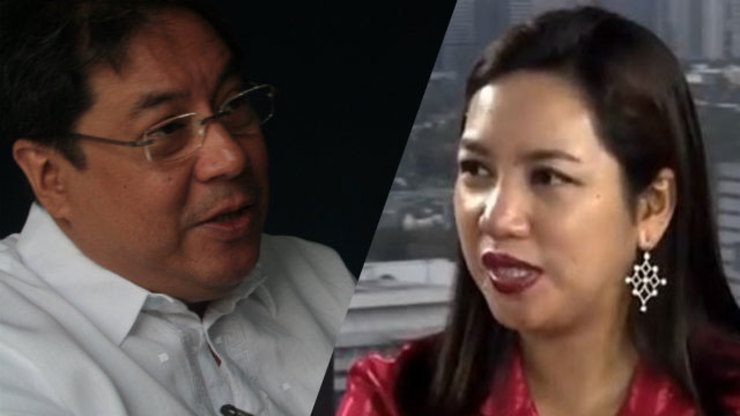 MANILA, Philippines (UPDATED) – On top of an ongoing probe into its vaccination program and preparations for Ebola, the Department of Health (DOH) is being rocked by protests over “personnel movements” at the central office.

In an interview with Rappler on Wednesday, November 19, DOH Undersecretary Ted Herbosa said he is considering legal action against Acting Secretary Janette Garin for “trying to fire” him.

Herbosa also confirmed 4 other members of the executive committee affected by recent changes in the central office:

Cortez, Busuego, and Tayag maintain their director positions, but they lose the “assistant secretary of health designate” title.

The changes happened barely a month after Garin took the position of Acting Health Secretary following the month-long leave of Health Secretary Enrique Ona, which is supposed to end on November 28.

President Benigno Aquino III had earlier said he has asked Ona to go on leave to “prepare answers” to his questions on the government’s vaccination campaign, and the balance between preventive and curative aspects of public health.

The National Bureau of Investigation is looking into the questionable purchase by the DOH of one million units of Pneumococcal Conjugate Vaccine 10 (PCV 10) – a vaccine used for the immunization of infants and children against pulmonary diseases – worth over P833 million. Complaints from some sectors alleged that DOH procured PCV 10 vaccines instead of a “more cost-effective” vaccine, the PCV 13.

On top of this, the department is in the thick of government preparations in dealing with the Ebola virus.

Garin ‘trying to fire me’

While the other DOH officials were either reassigned or left with a director position, Herbosa’s case was different.

His “secondment contract” expires November 15, but as early as October 20, this was essentially extended until November 15, 2015, through a Memorandum of Agreement (MOA) approving the renewal of the said contract.

But Garin told Herbosa on November 13 that he would go back to the University of the Philippines (UP) Manila after his contract with the DOH expires. He said she did not know of the early renewal.

Herbosa was an associate professor in UP before his appointment as undersecretary in 2010. He clarified, however, that the secondment contract was only about the “transfer” of his salary and benefits from UP to DOH. It has nothing to do with his position as department undersecretary.

This was done without the knowledge of Herbosa.

“What is the problem with this? I am the person involved, I should’ve signed the conformé. Before she writes UP Manila, I should say I agreed to return. I did not sign [Garin’s letter to Padilla],” he told Rappler.

Based on a document acquired by Rappler, former UP Manila Chancellor Manuel Agulto and Ona already signed as early as October 20 the MOA approving the renewal of the secondment contract, with the concurrence of Herbosa.

The contract, which was notarized on Monday, November 17, extends Herbosa’s stay in DOH until November 15, 2015.

“Very clear, what is she trying to do? She’s trying to fire me,” Herbosa lamented.

He consulted with “higher authorities” on what to do and was told to follow Garin and report to UP on Monday.

“But don’t sign a report order because she cannot fire you,” he remembered them saying.

He reported to UP Manila on Monday, as per Garin’s order, but the dean of UP Manila College of Medicine only confirmed the validity of his secondment contract.

In addition, Herbosa’s office only received on Monday what he called the “official firing letter” – Garin’s letter which expresses the department’s intention not to renew his contract – which he says is proof of his claim.

“I was waiting for this because I wanted to sue her, because if she does fire me, I can sue her. This is evidence for me. Obviously she’s firing me – that’s very clear. She has no power to fire me because she didn’t hire me. The one with the power to fire is the one who hired me – the President,” he added.

Herbosa said he is consulting with his legal team on whether to file cases against Garin for breach of contract and abuse of authority.

Herbosa said, however, that the internal tension in the department would not hamper its delivery of universal health care and essential services to Filipinos.

Last week, Garin said the changes at the central office are all part of a bid to “put the house in order,” in line with DOH’s rationalization plan.

(That is not a demotion. Every official and every employee will now fulfill their existing position so that there will be proper accountability, proper coordination, proper communication, and appropriate tasking.)

She added the changes are “ongoing,” and named other affected directors: Ariel Valencia, Irma Asuncion, and Chito Avelino.

In a copy of a department personnel order dated November 11 acquired by Rappler, Valencia – a director at the Food and Drugs Administration – was reassigned by Garin as director of the department’s National Capital Region office.

“Hindi ako ang direktang nag-alis ng responsibilidad. Sila po ang kusang lumapit (I did not directly remove their responsibility. They themselves approached me),” she said.

On Wednesday, Deputy Presidential Spokesperson Abigail Valte said she is not aware of the status of the “people that have allegedly been shuffled or reshuffled.”

“I cannot confirm if there was really a rigodon or a reshuffle,” she said, adding that Garin’s explanation was that people in DOH with “multiple designations” were or restored to their original positions.

“[Regarding] personnel movements normally…unless it’s an unusual or a specific case, the secretaries don’t really elevate that to the President,” she added.

When asked if it is normal for an acting secretary – who will likely only hold the position for a month – to implement such changes, Valte said they have not seen “any particular case” – at least not for the last 4 years.

Aquino had said that his satisfaction with Ona’s performance would depend on how well he explains his side on the vaccination controversy against him. – Rappler.com