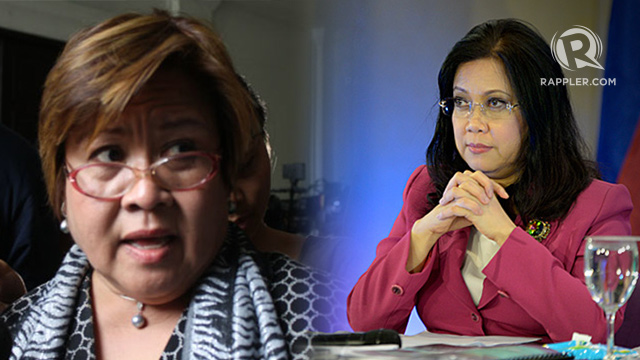 MANILA, Philippines – On the 5th anniversary of the Ampatuan massacre, two of the highest officials tasked to resolve the massacre sought to quash criticisms that the government has been remiss in its duty to resolve the case quickly.

In a speech before the Journalism Asia Forum on Sunday, November 23, Sereno said she, herself, finds it “unacceptable” that the prosecution of the case, as well as other cases involving media killings, has been delayed. (INFOGRAPHIC: 5 years after the Maguindanao massacre)

Justice Secretary Leila de Lima, meanwhile, gave assurances that she will not allow the perpetrators to get away with the crime.

On November 23, 2009, 58 individuals, including 32 journalists, were killed buried using a backhoe allegedly upon the order of the powerful Ampatuan clan in a bid to derail the political plans of now Maguindanao Governor Toto Mangudadatu.

The Philippines is the 3rd worst country in solving murders of journalists, next only to Iraq and Somalia, according to a 2013 Committee to Protect Journalists report.

While the court has effected steps to speed up the resolution of cases such as the Ampatuan massacre, Sereno said the court can only do so much.

“We, in the judiciary, are all too aware of our role in combating impunity. The courts are the refuge, often the final refuge, for those who seek to hold offenders accountable for their acts of violence against those from your ranks; and rightly so.  The long arm of the law often finds a face in our courts, yet it is my experience that the long arm of the law often has a very short reach,” Sereno said.

One of the difficulties that the court has encountered is enforcing warrants of arrests – a responsibility of the police.

Sereno said she has coordinated with the Justice Sector Coordinating Council, a body composed of the Department of the Interior and Local Government, the Department of Justice and the Supreme Court – to fill this gap.

Various groups, both local and international, have criticized the government for not securing a conviction 5 years since the massacre occurred. (READ: World awaits government action on Ampatuan case)

With 58 victims, close to 200 suspects and close to 500 witnesses from both sides, Sereno said the court has to tread a “balancing act” to ensure the fast resolution of the case and at the same time respecting the rights of the accused to due process.

The Supreme Court has issued guidelines designed to help fast-track the case, which includes allowing lawyers to submit judicial affidavits in question-and-answer format instead of requiring their witnesses to take the stand, and authoritizing Quezon City Regional Trial Court Branch 22 Jocelyn Solis-Reyes to decide on cases to decide on cases that are ripe for resolution.

A 3rd assisting judge has also been assigned to help Reyes with the case. The QC RTC hears the cases 3 times a week – 2 days for evidences and one day for motions – with no breaks.

Under fire for delays in the case, Justice Secretary Leila de Lima has stressed that observers must take note of the sheer number of people involved in the case.

Four years since the trial started, the court is still hearing bail petitions for some of the accused.

At least 41 police officers have been granted bail but the court denied the petition for bail of former Maguindanao police deputy provincial director Sukarno Dicay in a resolution released Friday, November 21.

In a statement issued Sunday, De Lima said this development was a positive sign towards how the court would decide on the bail petitions of the Ampatuans.

“With the Order denying bail, the prosecution had, in effect, established the connection of the massacre to the Ampatuans, who enlisted accused Dicay to help them,” De Lima said.

“Let me emphasize this point. The denial of Dicay’s petition for bail is a significant victory in the five-year trial of this case. The ruling of the Court is a window to the future prospects of the trial and wil offer insights to the Prosecution on how to proceed,” she added.

De Lima took over the supervision of the case after conflict between two private lawyers and public prosecutors over allegations of bribery and differences in legal tactics failed to be resolved.

The prosecution has rested its case on the bail petitions and the Ampatuans are expected to present their witnesses and evidence in the coming weeks. – Rappler.com