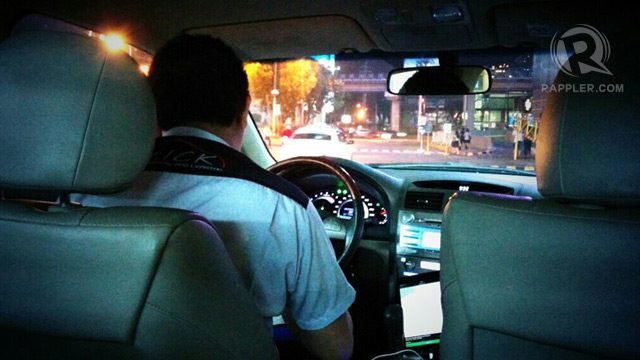 MANILA, Philippines – A lawyer for popular and now controversial mobile application Uber on Monday, November 24, said the app and its partner vehicles are not engaged in “public service” but “private contracts.”

It’s a crucial difference: if government determines that Uber’s partner vehicles are engaged in “public service,” it means they would need to be placed under regulation and have to apply for franchises.

“Uber is in a position that our partners are not colorum (illegal),” lawyer Donmark Calimon said during the Land Transportation Franchising and Regulatory Board (LTFRB)’s public hearing Monday on “online enabled transportation services.”

But companies already registered under the LTFRB – such as taxi, airport taxi operators – insisted Uber is not only operating illegally, it is also operating unfairly.

Philippine National Taxi Operators Association President and Quezon City councilor Bong Suntay said they “have nothing against technology” but noted they are against using private vehicles to provide public service.

“Para namang kawawa kami. If you’re a professional, if you’re licensed to do it, aangal ka rin kung yung kalaban mo hindi lisensiyado,” he said. (We’re at an disadvantage. You would complaint too if you’re licensed and you’re going against someone without a license.)

Suntay raised alarm over the fact that as it’s unregistered, Uber does not have a cap on the number of vehicles registered under it or a limit to how high or low drivers can charge its passengers. The Quezon City councilor pointed out that Uber can easily charge prices “at the touch of a button.”

Taxis in the country, on paper, are heavily regulated – operators have to comply with strict requirements to get franchises and face stiff fines for violations of the government’s rules. At the same time, however, it is not uncommon to hear horror stories of cab-rides-gone-wrong in the country.

Uber has been hogging Philippine headlines the past month, after one of its partner vehicles was caught in a sting operation led by the LTFRB and police.

The government earlier announced Uber was willing to integrate its partner vehicles under existing franchising schemes. Calimon reiterated his client’s openness “to work with the LTFRB towards crafting legal framework that maximizes the benefits that the Uber technology can bring to the Philippines” but took a stand with regards to the legal status of its partner vehicles. (READ: Abaya to taxi operators: Uber should make you modernize, innovate)

LTFRB Chairman Winston Ginez himself has said Uber’s partner vehicles are “colorum” or illegal, although they have yet to figure out how the vehicles would be incorporated into existing “rent-a-car” systems.

Ginez also admitted they were exercising “tolerance” towards the company, meaning they were not actively apprehending “colorum” vehicles partnered with the service.

Calimon said Uber is still “preparing its position on the various issues and will submit concrete suggestions and proposals.” The lawyer also added Uber would be willing to submit before the LTFRB a list of its partner vehicles and their drivers should they be asked to.

Lawmakers who have also delved into the issue, previously chided Uber for not providing government with those lists. – Rappler.com