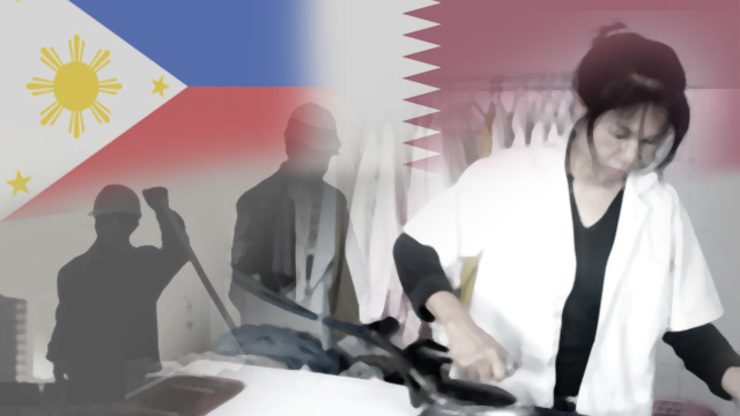 MANILA, Philippines – The labor chief of Qatar assured the Philippines on Sunday, November 23, that amendments to his country’s labor law that could benefit overseas Filipino workers (OFWs) are slated to pass before 2015.

The amendments will replace, among others, the visa sponsorship system which is largely seen as oppressive toward OFWs and other migrant workers.

“We are moving from a sponsorship-based to a contract-based employment scheme for migrant workers, and we hope our Parliament can accelerate the process,” Al Khulaifid said.

The Gulf state is host to 190,000 Filipinos, less than 8% of whom are believed to be undocumented or without the necessary travel documents, while more than 16% are household service workers (HSWs).

As in many Gulf countries, Qatar employs the “kafala” visa sponsorship system, wherein a migrant worker’s visa status is dependent on his or her employer.

Watchdogs have slammed the system of having employer-sponsors as a prerequisite for a work permit, saying it enables employers to exploit and gain inordinate control over migrant workers.

A number of these workers are subjected to unjust pay and harsh conditions, including confinement and passport confiscation.

Watchdogs have slammed the system of having employer-sponsors as a prerequisite for a work permit, saying it enables employers to exploit and gain inordinate control over migrant workers.

“Whether it’s the scale of abuse of domestic workers hidden from public view or the shocking death toll among construction workers, the plight of migrants in the Gulf demands urgent and profound reform,” she said.

Eighty-nine other pro-migrant workers’ groups worldwide have “signed” the statement with the HRW, urging reform.

In a press statement, the Philippine labor department said Al Khulaifi had assured Baldoz that Qatar’s amended labor law “also provides for the abolition of the exit permit requirement for migrant workers leaving the country.”

Lawyer Henry Rojas of the Center for Migrant Advocacy (CMA) Philippines said “that’s a good development” because “it removes one hold of the employer.”

The labor department’s statement is unclear, however, if the permit requirement for migrant workers seeking another employment within Qatar without having to go back to their home country will also be abolished.

“Will the worker be allowed a new employment within the country?” Rojas asked.

If not, he said, the amendments sought to be passed by Qatar’s parliament “still fall short of the general requirements to reform immigration policies” but is a “step towards that direction.”

Rojas said countries like Qatar “should allow the [migrant] worker to transfer employment without first obtaining the consent of the [first] employer,” such that the worker is not forced to leave Qatar.

He explained that the present system is exploitative, precisely because it “controls the movement” of the migrant worker.

The employer’s consent is needed before a migrant worker can change jobs and/or be granted an exit permit to go back to his or her home-country, prompting workers to give in to demands of involuntary labor, among others, just to obtain the necessary permit.

Under the kafala system, the employer’s consent is needed before a migrant worker can change jobs or be granted an exit permit to go back to his or her home country.

Migrant workers are forced to give in to demands of unpaid or involuntary labor, among others, just to obtain the necessary permit from their employer.

Baldoz was on her way to Kuwait for the 3rd Abu Dhabi Dialogue when she made the stop in Qatar.

The Sunday meeting was “brief” but “productive,” Baldoz said.

She and Al Khulaifi agreed to resume by January 2015 what she regarded as “long overdue” bilateral talks on labor issues confronting Filipinos deployed to Qatar.

The Philippines-Qatar Joint Committee Meeting (JCM) on Labor Matters in January 2015 will be the first of its kind in 5 years. The first meeting was held in Bohol, Philippines, in March 2009.

The labor department said a labor agreement between the two countries was signed on March 10, 1997, which formalized and outlined the procedures for the deployment of Filipino workers in Qatar.

The Republic Act 8042 or the Migrant Workers Act of 1995 mandates the existence of a bilateral agreement between the Philippines and the migrant-receiving country, aimed at protecting overseas workers’ rights. (READ: Philippines fails to implement pro-OFW law – watchdogs)

The Philippine law also requires the host country to be a signatory to pro-labor international treaties, have an inclusive labor law covering migrant workers, and be constantly pursuing measures to protect migrant workers’ interests.

During the Sunday meeting, Al Khulaifi expressed to Baldoz the confidence that Qatar employers have in Filipino workers. He highlighted his country’s need for more skilled workers given its expanding economy.

One hospital alone has an immediate need for 500 nurses and medical technicians, he said.

“There is no reason why we should make it difficult for them to employ Filipinos when they treat them well. We assure you we continue to ensure that the workers we send to Qatar meet your manpower requirements.”

Qatar is also set to host the 2022 FIFA World Cup, an international sporting event which Baldoz expressly hoped will give Filipinos employment opportunities through “the infrastructure projects planned for the said event.”

Baldoz also assured her counterpart in Qatar that the Philippines is “continuously reviewing our rules and regulations to make it easy for foreign employers to hire Filipino workers.”

“There is no reason why we should make it difficult for them to employ Filipinos when they treat them well. We assure you we continue to ensure that the workers we send to Qatar meet your manpower requirements,” Baldoz was quoted as saying.

Al Khulaifi also shared measures that Qatar was implementing for the protection of migrant workers.

“To be honest with you, I have been very tough on those who mistreat migrant workers, particularly those who charge exorbitant recruitment fees,” he said.

He added that the labor ministry has internally resolved 450 complaints from foreign workers, with only 36 proceeding in court.

Technology-based, ATM machine-like kiosks that entertain and receive labor complaints in 5 languages are also in place, he said.

He added that there is also an e-payment Wage Protection Scheme in place, remitting workers’ salaries through electronic banking even to foreign banks in Qatar.

For her part, Baldoz said “an incentive and rewards system for Qatari employers who are protective of our workers’ welfare” is set to be implemented by the Philippine Overseas Labor Office (POLO) in Qatar.

Joining the Philippine contingent with Baldoz during the meeting were Philippine Ambassador to Qatar Crescente Relacion and DOLE Undersecretary Ciriaco Lagunzad III. – Rappler.com