Nov 28, 2014 3:27 PM PHT
Michael Bueza
Facebook Twitter Copy URL
Copied
The translation of the bill to the national language will help allay fears or concerns of Filipinos about the proposed Bangsamoro region in Mindanao, says the Komisyon sa Wikang Filipino 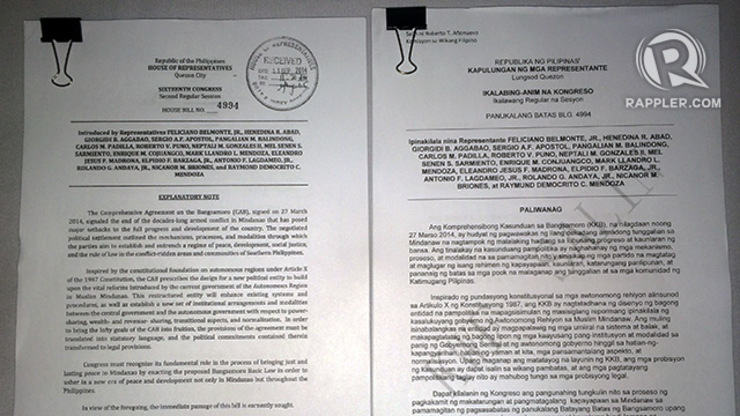 MANILA, Philippines – To help inform Filipinos about the proposed Bangsamoro political entity in Mindanao, the Komisyon sa Wikang Filipino (KWF or the Commission on the Filipino Language) has translated the draft Bangsamoro Basic Law (BBL) to Filipino.

Añonuevo made the announcement during KWF’s monthly Kapihang Wika event at the National Commission for Culture and the Arts (NCCA) building in Intramuros, Manila, on Friday, November 28.

(If the discussions regarding this important measure is in the language of the masses, or in the national or regional language, the people would understand why this law is needed.)

The Filipino translation of House Bill 4994, he said, would help resolve misunderstanding when reading or interpreting the measure that was originally written in English. (INFOGRAPHIC: The Bangsamoro peace deal at a glance)

Stakeholders of the BBL would be consulted first before releasing an official Filipino translation of the draft law, said the KWF.

Añonuevo added that the commission plans to translate the draft BBL to regional languages such as the Manobo, Tausug, or Meranaw, but they do not have funds for it.

“Hindi pa namin maasikaso iyan dahil kulang na kulang kami sa tauhan, at wala rin kaming budget para magbayad sa mga mahuhusay na tao (We have yet to work on that, because we lack manpower and we do not have a budget yet to pay experts),” he said.

He sought the help of Congress and both sides of the peace panel to provide them funds for the endeavor.

Añonuevo said that the KWF would formally give a copy of the Filipino translation of HB 4994 to Congress through Representative Sitti Turabin Hataman of Anak Mindanao party-list. (TIMELINE: The long road to the Bangsamoro region)

He added that copies of the bill in Filipino would also be provided to concerned agencies and local government units.

In September, the Aquino administration formally handed over to Congress the draft Bangsamoro Basic Law. The government hopes to ratify the measure by March 2015. – Rappler.com