Miriam to force Senate to take stand on EDCA MANILA, Philippines (Updated) – After a hearing on the Enhanced Defense Cooperation Agreement (EDCA), Senator Miriam Santiago on Monday, December 1, said she is filing a resolution that will force the legislative chamber to take a position on the new Philippine-US deal allowing the US military to construct facilities and preposition defense assets inside Philippine military bases.

“I will first draft it and then circulate it for signatures of my colleagues and then I will present it in the form of sponsoring speech and then we’ll have a plenary debate on it,” Santiago said in a press briefing after the hearing.

She recognized that the Senate cannot compel Malacañang to submit EDCA to the Senate for its ratification.

But will Santiago, head of the Senate foreign relations committee, get the support of the Senate that’s dominated by administration allies? Santiago is confident in spite of mixed signals from her colleagues.

“That will depend… I think the sentiment is widespread that the Senate does not feel happy that its constitutionally accepted powers such as the concurrence with the ratification of a treaty should be short circuited by the method employed by the executive branch with respect to EDCA,” Santiago said in a press conference after the hearing.

But she added: “In pragmatic terms, it is entirely possible that [the President] might be able to convince the greater majority to vote his way – the way of EDCA – even if the arguments do not really resolve the conflict but simply out of party loyalty. But still I’m hoping that by the way we word the resolution, we’ll be able to get even the votes of those who are in favor of the Liberal Party (LP) position.”

Senate President Franklin Drilon, an LP stalwart, evaded a question on the chances of Santiago’s resolution passing in the Senate. “I do not know. We will refer it to the appropriate committee first,” said Drilon.

Signed in April by the executive branch of the Philippine and US governments, EDCA was brought to the Supreme Court by various personalities who assert that the deal needs to be ratified by the Senate.

The Senate hearing was conducted a week after the Supreme Court held the last set of oral arguments for and against the deal. The two camps are expected to file their memoranda before the end of the year, and the High Court will rule after their submissions.

Malacañang maintains that EDCA is an executive agreement because it is an implementation of existing treaties. Foreign Affairs Secretary Albert Del Rosario also noted that there are a number of Memorandum of Understanding (MOU) agreements with other countries that did not require Senate concurrence.

Critics argue that EDCA is a treaty by itself and thus needs Senate ratification.

A message from the old Senate

Former Senator Rene Saguisag, one of the “Magnificent 12” senators who voted in 1992 to evict US bases in the Philippines, joined the hearing to ask the senators not to let President Benigno Aquino III have his way in this new deal with the US.

Magallona however noted the dilemma that the Senate is facing. “May the Senate act in concurrence of a treaty without transmission from the President?”

This was when the Senate resolution was discussed.

Santiago has always been vocal about her position that EDCA needs Senate ratification.

While the legal battle was focused on whether EDCA can stand as an executive agreement or needs Senate ratification, the senators, just like the justices of the Supreme Court, also focused their questions on the implementation of EDCA in relation to the West Philippine Sea, where China is aggressively claiming the country’s maritime territories. 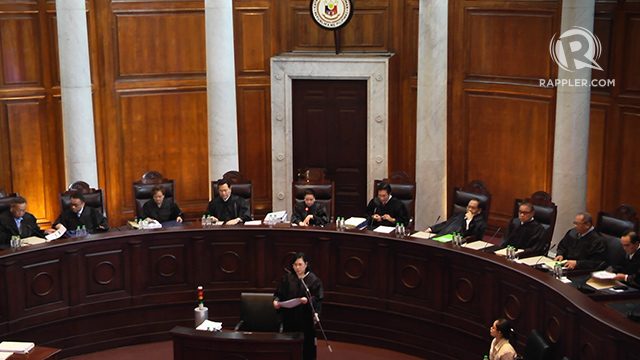 Foreign Affairs Secretary Albert del Rosario enumerated before the Senate several actions of China including the reclamation of reefs in the West Philippine Sea.

“Maliwanang ngayon na wala pala tayong mapapala doon. Hindi nakalista sa EDCA ano ang tulong ang ibibigay nila sa atin (It is clear that we will not benefit. EDCA doesn’t list the kind of assistance the US is going to give us),” Santiago said.

Defense Undersecretary Pio Lorenzo Batino, chairman of the Philippine panel on EDCA, argued: “It is through EDCA that we envision a greater preparation mechanism for the mutal defense to be implemented effectively in the future.”

While government counsel Acting Solicitor General Florin Hilbay conceded that EDCA is no guarantee that the US will defend the Philippines in case of armed attack in the West Philippine Sea, he emphasized both in the SC and the Senate how EDCA can help the Philippine military prepare against armed attacks.

At best, Defense Secretary Voltaire Gazmin said EDCA and the presence of US defense assets in the country can deter China from launching an armed attack.

He said EDCA is among a range of options that the government has taken to prepare for the security threat in the West Philippine Sea.

“We use EDCA as deterrent to any threat to our security. [At the same time], we continue to fill in the gaps [in our capabilities] through our modernization,” Gazmin said.

Hilbay also reiterated that EDCA is not exclusive to the West Philippine Sea. He cited the role that US military played in helping victims of Super Typhoon Yolanda (Haiyan) last year. (READ: SolGen: EDCA no guarantee US will defend PH and Justices to EDCA critics: How to defend West PH Sea)

In an interview on the sidelines of the Senate hearing, anti-EDCA petitioner and counsel Harry Roque said the Senate proceedings should be considered by the High Court when resolving the constitutionality of EDCA.

“They are no longer silent. The chair of the committee is very vocal about her opposition to EDCA without concurrence of Senate. This should be taken into consideration by the court. They should ignore altogether the arguments of the Solicitor General that silence is acquiescense and a stamp of approval for EDCA to be entered alone by the President,” Roque said.

Hilbay disagreed, saying the Senate proceedings are “separate” from the Court petition.

For Santiago, however, the Senate debate was “won by anti-EDCA people, all apparently taken aback by the fact that although EDCA is clearly a treaty, the President did not deem to send EDCA to the Senate for concurrence.” – Rappler.com