Telcos: We’re not to blame for 2013 transmission woes

Dec 4, 2014 8:27 PM PHT
Reynaldo Santos Jr
Facebook Twitter Copy URL
Copied
A telco official says, 'In our system we didn't get any alarm during elections. Our system was perfect.' Could it be the fault of Smartmatic? 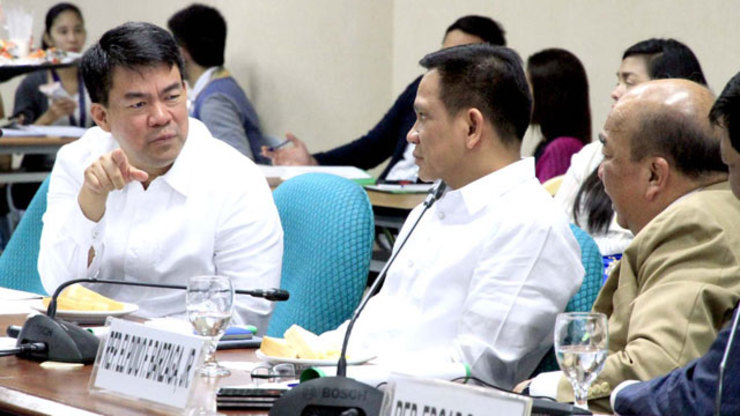 MANILA, Philippines – The blame falls on machine provider Smartmatic as telecommunication companies (telcos) again tried to clear their name over the poor transmission rate of poll results in the 2013 elections.

Representatives of PLDT Company and Globe Telecoms were able to defend themselves in the Senate hearing on Thursday, December 4. Smartmatic, however, failed to attend and explain itself.

In the hearing, Senator Aquilino Pimentel III expressed disappointment over the dismal 76% transmission rate in 2013, despite Smartmatic getting a P494-million contract with the Commission on Elections (Comelec). This amount is higher than the contract awarded in the 2010 polls, which registered a higher transmission rate.

“I don’t want the excuse that we should be happy with the 76% rate. That it shouldn’t be lower than that. But it’s P494 million!” Pimentel said, referrring to Smartmatic’s still positive response on the issue in 2013.

“We have reported in 2013 that we never had any negative feedback in terms of the transmission we had,” PLDT vice president and legal services head Florentino Mabasa Jr said. He added that they indicated in their report they didn’t receive any complaint specifically from Smartmatic over transmission issues.

Vicente Froilan Castelo of Globe Telecom’s legal and regulatory office said they have no idea why there was a dismal performance in transmission. “In our system we didn’t get any alarm during elections. Our system was perfect. We just don’t know where this transmission problem is coming from.”

Pimentel reminded the telcos to keep an eye on Smartmatic. “Put pressure on [Smartmatic] to also deliver. Otherwise you’ll be affected.”

The hearing also tackled other election issues that haven’t been fully resolved yet, including the appearance of “digital lines” in ballots, and the source code review.

It was former Comelec officer Melchor Magdamo who revealed that there were “lines” on decrypted images of physical ballots. Some of the “digital lines” ran over unshaded ovals on the digital ballots, causing voting machines to either add or subtract votes for a particular candidate.

Apart from that, the Comelec has been consistently questioned over its conduct of the source code review. In the hearing, the poll body was also criticized for creating strict requirements for the review.

Comelec Chairman Sixto Brillantes Jr said they have already created a committee to look into the “digital lines” issue. “We’ll specify the process [in reviewing the issue], and we invite interested parties to monitor this,” he said.

As for the source review, Comelec Commissioner Christian Robert Lim announced that they will open a source code review for the new machines to be procured by May 2015. – Rappler.com