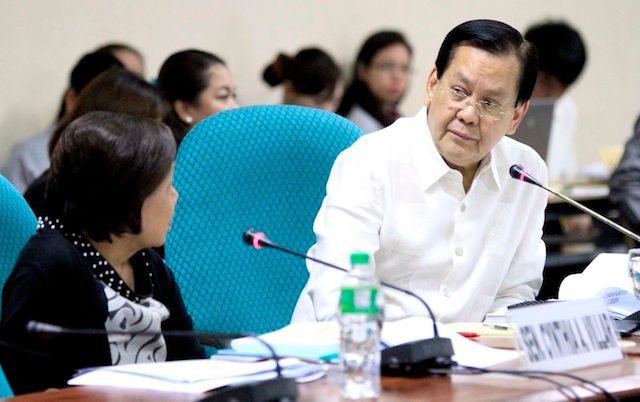 Facebook Twitter Copy URL
Copied
Despite the passage of the House version, the Senate remains unconvinced about the need and value of granting emergency powers to President Aquino to solve the looming energy shortfall

MANILA, Philippines – The Senate does not feel the need to grant special powers to President Benigno Aquino III to avert the projected energy crunch in summer 2015, despite the passage of a joint resolution in the House of Representatives.

The Department of Energy (DOE) projects a power shortfall of 782 megawatts in the summer months of 2015 due to the combined effects of the weather, the El Niño phenomenon, and the scheduled shutdown of the Malampaya plant.

But Osmeña is confident that the government can get the cooperation of the private sector to get additional power worth up to 1,600 megawatts – much more than what the DOE is asking for.

On December 9, Osmeña also got the commitment of Korean Electric Power Corporation Philippines (Kepco) to run its natural gas plant in Ilijan, Batangas to run at least 500 megawatts from March 15 to April 18.

“So, I really have to study what the House has passed in order to be able to explain to them why certain things that they may have inadvertently placed in the resolution are not really necessary for the Interruptible Load Program to be a success,” he added.

The Senate will pass its own resolution but it will contain more specific powers than what the House passed.

Osmeña said the Senate wants to exempt the Kepco-Ilijan plant from the Biofuels Act to allow them to use pure diesel during summer.

“It will be a very small price to pay,” the senator said.

The resolution will also authorize the President to use up to P500 million from the Malampaya Fund to pay for the storage of diesel that will be delivered to Kepco-Ilijan.

It will also direct the government to dredge the Pasig River to allow for the more efficient delivery of fuel to the Malaya Thermal Power Plant in Rizal.

Osmeña said he believes the Interruptible Load Program (ILP), which encourages private entities to use their own generator sets during peak hours, does not need legislation to be implemented.

Proof of this is the fact that the ILP has been in place in Cebu and Davao since 2010 even without concessions, Osmeña said.

The House joint resolution awards reimbursements and VAT exemptions to companies that will participate in the ILP.

“Like I said, even taxes are not a problem in Cebu or in Davao. But they seem to think that it would be a problem here,” Osmeña said.

House Joint Resolution No. 21 authoritizes the President to generate additional energy capacity through the ILP and the fast-tracking of new committed power plants.

Unlike Osmeña’s proposal that is limited in scope, the House version allows national agencies and local government units to suspend the operability of environmental laws such as the Biofuels Act and the Clean Air Act should they affect the operation and transmission of the contracted generation capacities – a provision that has met opposition from critics.

While the House passed the joint resolution on final reading two weeks before the Christmas break, Osmeña said the Senate will pass their version in 2015 since it is “completely unnecessary anyway.”

The DOE originally asked Congress to give the President powers to purchase or rent additional generating capacity of up to P12 billion, but it withdrew the proposal after the department’s own data showed the power crisis was not as bad as earlier projected. – Rappler.com