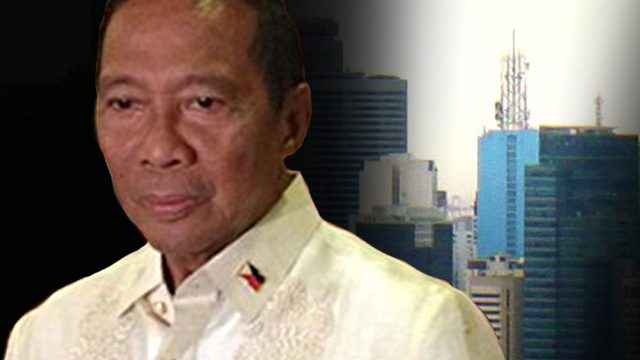 MANILA, Philippines (UPDATED) – For the first time in his presidency, President Benigno Aquino III is the only top government official in the country who enjoys majority trust and approval of Filipinos.

Vice President Jejomar Binay had been the most trusted and appreciated national public official in the Aquino administration – based on polls – until the November survey conducted by Pulse Asia Research Inc, which released the results on Friday, December 12.

Based on the results of the nationwide survey conducted from November 14 to 20, Aquino scored a 59% approval rating and 56% trust rating – the highest among the leading national officials.

Binay, who is hounded by corruption allegations, experienced a drastic drop in his ratings – a 45% approval rating, 21 percentage points down from his 66% in September. This makes the Vice President the third most appreciated national official in the country, next only to Senate President Franklin Drilon who enjoyed higher ratings during the survey period.

Binay’s trust rating plunged to 44% from 54% in the last survey period.

The downward trend is similar to his fall in the latest polls on 2016 presidential preferences.

Aquino enjoys majority approval and trust across almost all geographic areas and socio-economic classes, except in Metro Manila, the only place where less than half, or 49%, approve of, or trust the President.

In contrast, Binay has a strong Metro Manila base where he enjoys 50% approval and 49% trust. His approval and trust ratings are lower in the Visayas, Mindanao and among Class D and Class E citizens. Aside from Binay,  Drilon is the only other key official who experienced a significant change in his rankings – although his went the opposite direction. Drilon enjoys 47% approval from 39% in September, putting him second to Aquino, and 42% trust from 33%.

Speaker Feliciano Belmonte Jr obtained an approval rating of 34% and a trust rating of 31%. In the case of Chief Justice Maria Lourdes Sereno, 37% of Filipinos approve of her performance and 33% trust her. Among institutions, Filipinos trust and appreciate the Supreme Court the most. The High Court was the only key government institution that scored majority approval rating at 51%. The Senate obtained a 42% approval rating, and the House of Representatives, 38%.

None of the institutions received majority trust ratings however. The Supreme Court received the highest trust rating at 41%, followed by the Senate at 37, and the House at 34%.

Malacañang and the Binay camp both expressed satisfaction over the survey results.

Binay’s spokesperson, Cavite Governor Juanito Victor Remulla, said that the Vice President is “happy with the results” as “despite the toxic atmosphere of political destruction, the VP’s core constituency remains steadfast in believing what he can do for the country.”

Remulla said that as far as the Vice President is concerned, the “ultimate survey” is in May 2016 – the presidential elections which he remains confident of winning, despite his plummeting public ratings.

“He believes that May 2016 is the ultimate survey to determine the next President of the Republic. He is confident that the people will be behind him all the way there,” he said.

Presidential Spokesperson Edwin Lacierda said the latest survey results reflect “the  public’s continuing confidence in our administration, which from the beginning has endeavored to bring about reform and real change in the country.”

Pulse Asia said the survey sampled 1,200 Filipinos nationwide but did not indicate how many provinces were covered by the poll.

Some of the important developments during the polling period were the Senate probe on corruption allegations against Binay, the Senate inquiry into the supposed overpricing of the Ilolilo Convention Center endorsed by Drilon, and Aquino’s attendance of the Asia-Pacific Economic Cooperation Leaders’ Meeting in China and the Association of Southeast Asian Nations Summit in Myanmar. – Rappler.com