What’s in a word? Acting vs OIC PNP chief Facebook Twitter Copy URL
Copied
According to Napolcom officials, the only difference between the two designations is the manner in which a PNP official assumes office

MANILA, Philippines – It’s an unprecedented and “unusual” situation in the Philippine National Police (PNP): its chief, Director General Alan Purisima, is preventively suspended for 6 months as the Ombudsman investigates an allegedly anomalous deal between the PNP and a courier service company.

The Ombudsman issues preventive suspension for ongoing investigations when:

A 6-month suspension without pay is the maximum the Ombudsman can impose on a government official.

As Purisima rides out the preventive suspension, Deputy Director General Leonardo Espina takes over the 150,000-strong police force as the office-in-charge (OIC).

But some sectors in government, including a political ally of Roxas’, insist that being an OIC is not enough is not enough to exercise these powers.

The comment came in the lead-up to Pope Francis’ visit to the country and the APEC Ministerial Meeting.

What’s the difference between an acting chief and OIC chief?

To Napolcom officials, in terms of functions and powers, there is none. The Napolcom has administrative control over the PNP.

In the same briefing, Napolcom Vice Chairman Eduardo Escueta said the only difference between an acting PNP chief and an OIC PNP chief is the matter in which they ascended to power.

An OIC chief is assigned based on the PNP’s hierarchy. 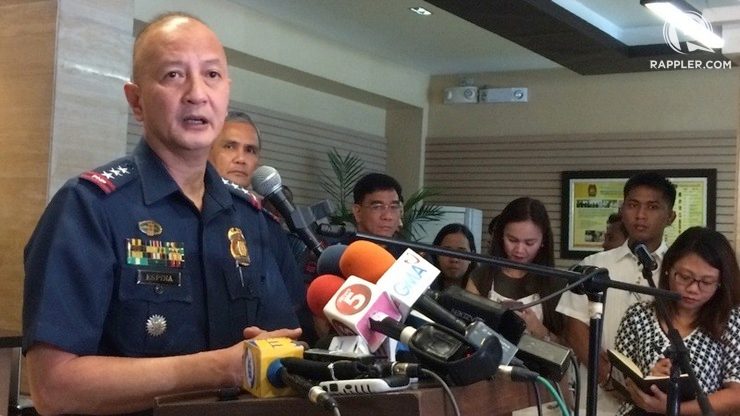 “There is not much difference because they are both required to observe the policies of the PNP, perform functions and duties of the chief PNP,” added Escueta.

“If it has to do with peace and order, he can appoint an OIC to replace [officials in the area],” said Roxas.

Roxas, however, said that even until now they are still studying whether an OIC chief has the power to sign documents and authorize decisions when it comes to the PNP’s funds.

A preventive suspension means Purisima’s “powers [as PNP chief] are suspended.” But his suspension apparently doesn’t mean all privileges are revoked.

But Roxas downplayed this, adding the suspension doesn’t mean Purisima needs to be forced out of the official residence.

Ironically, the “White House,” a donation from Purisima’s friends, is the basis of separate charges filed against him before the Ombudsman.

The case of Garin

While in the case of the PNP, the differences – or the lack of it – between an OIC and an acting chief is clear, not too long ago in a different government agency, confusion arose over the difference between the two positions.

For a while at the Department of Health, it remained unclear whether Undersecretary Janet Garin was the acting secretary or the OIC secretary.

Palace spokesperson Undersecretary Abigail Valte explained then that the difference between the two designations are in the “powers that come with the designation.”

Garin garnered controversy after she reshuffled some members of the department.

Asked why Espina was merely an OIC chief and not an acting chief of PNP, Roxas said the Napolcom was still “studying the legality” of the issue. Roxas said President Benigno Aquino III, who is currently in South Korea, would have the final say on the matter.

The DILG chief and the President are also set to meet when he comes back and discuss whether it would be best to appoint a new PNP chief, among other things.

Purisima is opposing the suspension, and has a motion for a temporary restraining order before the Court of Appeals. – Rappler.com