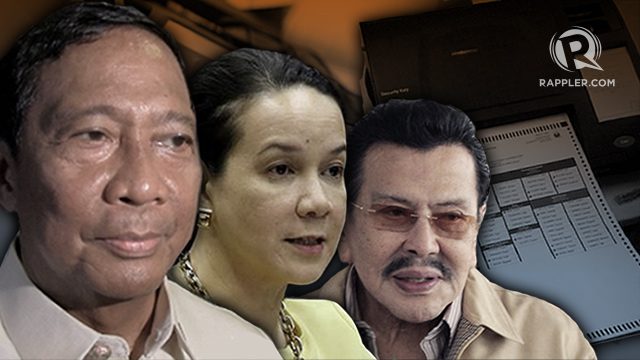 MANILA, Philippines – Vice President Jejomar Binay has shrugged  off as “hearsay” reports that former president now Manila Mayor Joseph Estrada has committed to endorse Senator Grace Poe, should she seek the president in 2016.

(I just don’t want to speculate. First, I was only told about it – you told me. As far as I’m concerned, that’s hearsay.)

In late October, Estrada reaffirmed his support for Binay’s candidacy and expressed confidence that he would survive the “demolition” job against him.

Binay suggested that even if Estrada had made the pronouncement, he might have been “joking.”

Philippine Daily Inquirer columnist Neal Cruz wrote that Estrada had categorically stated that while it would be a “difficult” decision, he would ditch Binay and endorse Poe should the two run for president in 2016.

Estrada explained that he would choose the senator over Binay because she is the daughter of the late actor Fernando Poe Jr, his best friend who was like more than a brother to him. Estrada said campaigning for the younger Poe would be his way of “repaying” her father.

To this, Binay said: “Huwag ninyo na ako isama sa mga sali-salitang ganyan. Kung sinabi, sinabi. Alam mo naman madalas nagbibiro si Pangulo (Don’t involve me in those talks. If he said it, then he said it. You know the President [Estrada], he likes to joke around.)

The Vice President said what is “factual” is Estada’s pronouncement just two months ago that Binay is his presidential candidate.

Binay went on to recall how Estrada had chosen him as his running mate in the 2010 elections.

The Vice President was the campaign manager of the late actor Poe when he ran for president in 2004.

In spite of his closness to Senator Poe, Binay said he would be ready to run against her if she becomes the administration candidate. But he said he is also open to getting Poe as his  running mate.

Talks about Poe’s presidential candidacy were bolstered by the results of a Pulse Asia Research Inc survey, which showed the senator second to Binay in the presidential race if elections were held today.

From 4th place in the September Pulse Asia survey Poe jumped to 2nd place in November. While Binay remained the frontrunner, his numbers have been going down since Senate hearings into the alleged overpriced Makati parking building led to other corruption allegations against him and his family. – Rappler.com