Facebook Twitter Copy URL
Copied
(UPDATED) US Marine Lance Corporal Joseph Scott Pemberton undergoes booking procedure that enables the Olongapo Regional Trial Court (RTC) Branch 74 to gain jurisdiction over the serviceman, but is not arraigned yet
OLONGAPO, Philippines (UPDATED) –  The arraignment of US Marine Lance Corporal Joseph Scott Pemberton over the alleged murder of transgender Filipina Jennifer Laude did not push through as expected on Friday morning, December 19, lawyer Harry Roque said.
In a much-awaited public appearance, Pemberton voluntarily surrendered to the local trial court in a dark gray suit and in handcuffs, Roque, the lawyer of the Laude family, said in an interview with reporters.
Pemberton’s arraignment did not push through after his camp filed a motion to suspend proceedings before the Olongapo Regional Trial Court (RTC) Branch 74.
Roque said Pemberton underwent “booking” procedure that enabled the Olongapo court to gain jurisdiction over the US visiting soldier.
The lawyer said their camp will file a motion asking for the detention of the 19-year-old US soldier in a local jail.
“The crime occurred here [in Olongapo]. He committed the crime while he is not on official duty, so he should be treated as an ordinary person,” Laude co-counsel Virgie Suarez said in an interview with reporters before Pemberton’s appearance in court.
Laude’s sister Marilou said she was glad to finally see Pemberton face-to-face. She described Pemberton as “maamo ang mukha (baby-faced).”
“I wondered how he could do that to my sister,” said Marilou, when asked what she thought upon seeing Pemberton.
Tight security
During Pemberton’s appearance Friday, members of the press were barred from entering the court room.
Roque said they will ask the court to allow media to cover the upcoming hearings, the next scheduled on Monday, December 22. “It’s not right for the trial not to be open to the public, ” he said in Filipino.
Security was tightened around the surrounding area of the court. Dozens of local police guarded a movable metal fence on the entrance of the street leading to the justice hall where the court house is.
Lieutenant Colonel Harold Cabunoc, chief of the Armed Forces Public Affairs Office, said Pemberton’s convoy left Camp Aguinaldo at 2 am and arrived in Olongapo City at 4:30 am.
He entered the building at around 5 am on Friday, witnesses said.
Cabunoc said Pemberton was transported by US personnel but the Philippine National Police and the Military Police Battalion provided security augmentation.
Witnesses said Pemberton left the court premises at around 10 am through the back exit of the Olongapo justice hall, escorted by around 7 to 10 US Marines in white polo long sleeves.
A portion of the metal fence at the back of the building was cut down the night before his scheduled appearance to make way for the suspect. 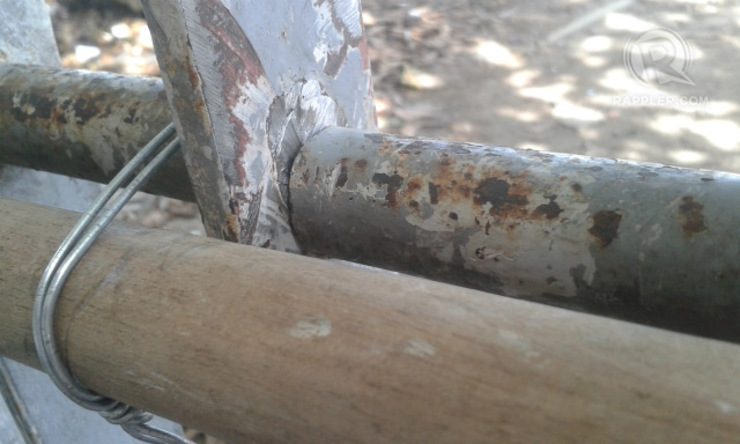 For now, he will stay at Camp Aguinaldo based on the commitment order issued by the court, said clerk of court Gerry Gruspe.
Pemberton was brought back to the Mutual Defense Board-Security Engagement Board facility inside Camp Aguinaldo at around 1:10 pm.
Protests
Calling for justice over Laude’s murder, early morning protests a meter away from the fence were met with little resistance.
Laude’s murder was politically charged and regarded by some sectors as a hate crime, driving media frenzy and cracking open deep-seated prejudices against transgender Filipinos in the predominantly Catholic country of nearly 100 million.
The transgender woman’s lifeless body was found slumped in the toilet of a cheap hotel in Olongapo City, hours after she was last seen by her friend with Pemberton.
Her tragic death in mid-October – found to be caused by drowning – prompted calls to revisit the Philippines-US Visiting Forces Agreement (VFA).
The agreement allows the conduct of US military drills on Philippine soil. One of these drills brought Pemberton to the country.
Custody battle
While his murder complaint was being heard by Olongapo prosecutors, Pemberton  was held at a US holding location inside the Philippine military headquarters in Camp Aguinaldo but still under US custody.
Upon the issuance of his arrest warrant, the US resisted an official request from the Philippine government seeking custody over Pemberton.
The Olongapo district jail houses detainees on trial who have submitted to the jurisdiction of Olongapo courts.
While saying murder is an “extraordinary case” that warrants the transfer of Pemberton’s custody to the Philippines, the government had said it will no longer appeal the US decision, which is allowed under the VFA.
In a radio interview, Laude family lawyer Harry Roque said the Laudes  will challenge the Philippines’ refusal to appeal the US’ custody. – with reports from Carmela Fonbuena/Rappler.com