MANILA, Philippines – The Office of the Presidential Adviser on the Peace Process (OPAPP) recommended to President Benigno Aquino III the appointment of retired General Emmanuel Bautista as the government’s chief negotiator with the Communist Party of the Philippines’ (CPP) political wing, the National Democratic Front.

This was dislosed to Rappler by three sources involved in getting the two camps back to the negotiating table. “He (Bautista) has been recommended by OPAPP,” a senior government official told Rappler. The recommendation awaits the signature of the President.

Bautista retired as chief of staff of the Armed Forces of the Philippines in July this year and later joined Malacañang as executive director of the Cabinet Cluster on Security, Justice, and Peace, tasked to lead policy discussions on key issues such as territorial disputes and peace talks. He has the rank of undersecretary.

If his appointment is approved by the President, Bautista will be replacing Alex Padilla, who has moved on after the collapse of the talks in 2013 to head Philhealth. Padilla is still involved in getting the NDF back to the negotiating table, however.

OPAPP Secretary Teresita Deles and Bautista did not respond to our text messages.

Talks between the Aquino government and communist guerrillas are being revived after a two-year impasse. January will be a getting-to-know-each-other phase between Bautista and the NDF panel, said one of the sources privy to the talks.

CPP founder Jose Maria Sison revealed in interviews that an informal meeting is set for January before both parties return to the negotiating table for formal talks in February. (READ: Hope springs eternal for talks with Reds)

The OPAPP recommendation is a curious one.

Bautista, as the military’s former deputy chief of staff for operations (J3), is one of the architects of the government’s Internal Security and Peace Plan (IPSP), dubbed Bayanihan, which has been blamed by the communist movement for alleged human rights abuses.

It was also under his term as Armed Forces chief when alleged CPP leader Benito Tiamzon and wife Wilma were arrested in a military-led intelligence operation in Cebu in March 2014.

Another source however pointed out that Bautista’s military background is precisely his asset. “Warriors make the best peace negotiators because they know the pain of war,” said the source who spoke on condition of anonymity.

The sourced added that the CPP can be assured that as former AFP chief, Bautista has influence over the military and can deliver on his promises.

Oplan Bayanihan pushes for  a “hearts and minds” approach to the insurgency problem. It replaced the military’s notorious Oplan Bantay Laya counter-insurgency campaign, which was blamed for the spate of killings of political activists during the time of President Gloria Arroyo. 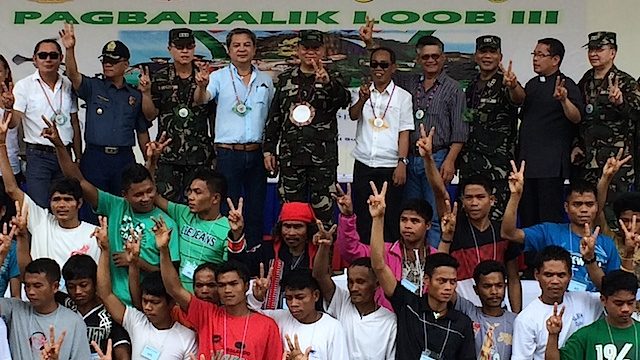 Bautista graduated at the Philippine Military Academy in 1981, the peak of the insurgency.

After his J3 post, Bautista became commander of the Capiz-based 3rd Infantry Division and then Army chief before taking the top post in the Philippine military. For the top Army and AFP posts, he bypassed more senior commanders – proof that he enjoys Aquino’s confidence.

President Aquino and Bautista worked closely together in the back-to-back man-made and natural disasters in 2013 – the 3-week long siege in Zamboanga and the aftermath of the Bohol earthquake and Super Typhoon Yolanda in the Visayas.

Bautista’s father, the late Army general Teodulfo Bautista, was slain by Moro National Liberation Front guerrillas when he was set to talk peace with them in Jolo, Sulu in 1977. (READ: Son of slain general is new AFP chief)

The military headquarters in Sulu is named after the slain general. – Rappler.com